Be Aware Of What Is Required Says CdM 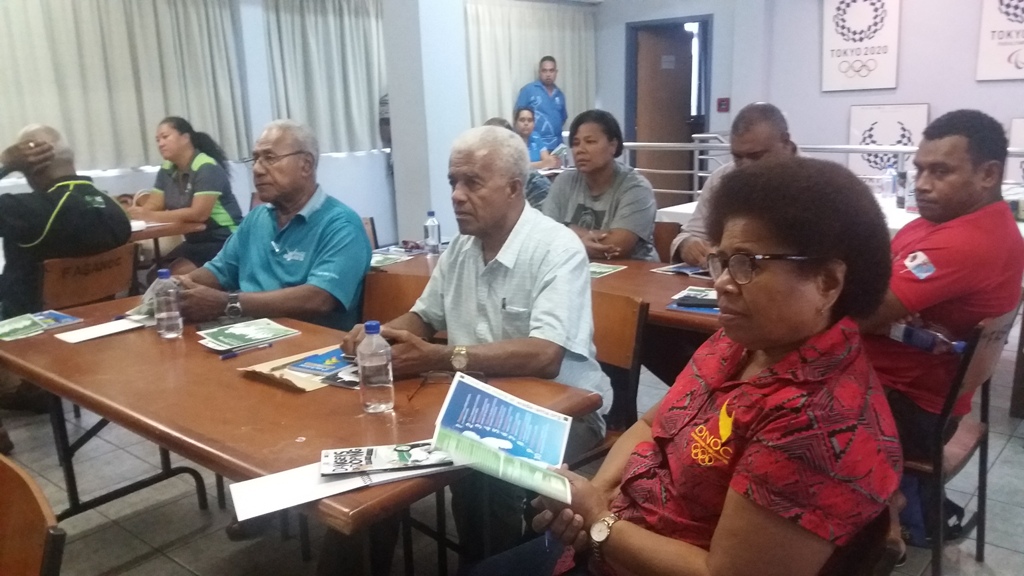 Athletes and officials have to be fully aware of what is required of them at all times including drug testing said Chef de Mission to the 2020 Olympic Games in Tokyo, Japan, Patrick Bower during a one- day Drug Free Sports Fiji workshop held earlier this month.

The workshop which was conducted by Drug Free Sports Fiji was attended by officials earmarked to be a part of Team Fiji to the Olympic Games in July.

Mr Bower said athletes could be expected to be tested at any time before, during and a certain period after competition.

"It is important that officials know what the rules are because not knowing could lead to disqualification and also slur the reputation of Fiji," he said.

Mr Bower said we often think that testing for drugs is done at the major events however this was not the case as drug testing can be done at anytime and anywhere.

"So I cannot stress importantly enough to officials to know the rules and regulations covering drug testing and anti-doping which must be followed at all times."

Drug Free Sports Fiji's trainer Ulita Serukalou stressed the importance of officials knowing where their athletes are at all times and to familiarise themselves with the Anti-Doping Administration and Management System (ADAMS).

ADAMS is a Web-based database management system that simplifies the daily activities of all stakeholders and athletes involved in the anti-doping system.

Ulita said athletes missing out on testing for three alleged whereabouts failures was the equivalent of a positive test and as such athletes can be banned or stripped of any title or medal he or she may have won.

"We have encountered instances where athletes input their whereabouts on ADAMS but fail to update it because in Fiji movement is erratic and athletes often move around a lot," she said.

"And because of this we are unable to do a drug testing and this could lead to an athlete being suspended or worse banned.

"Athletes in all sports must register their whereabouts at certain times so they can be drug-tested at random."

Fellow trainer Mosese Finau shared how an athlete they were told to test was not where he was supposed to be and had taken a horse cross country to go to the airport.

"So we drove to the airport to wait for him and luckily we were able to conduct his testing otherwise he would have lost a contract to play overseas," he said.

Both Ulita and Mosese said getting athletes on ADAMS was important and would save those being tested from any embarrassment.

Drug Free Sports Fiji also advised athletes and officials to be aware of the Prohibited List which is released by the World Anti-Doping Organisation (WADA) every year.

"Often new drugs are added to the list every year so it is important for officials and athletes to know what is on the list and what is not," said Mosese.

However, for athletes that are required to take a certain drug, the Therapeutic Use Exemption (TUE) form is available and should be filled prior to competition.

A TUE is an exemption that allows an athlete to use, for therapeutic purposes only, an otherwise prohibited substance or method (of administering a substance).

Also, 2016 Olympic wrestling bronze medalist Jenny Fransson is the latest athlete to be tested positive for a banned substances and has been removed from the Swedish team for Tokyo 2020.

Anti-Doping education is an ongoing program for FASANOC and Team Fiji and is an important component of FASANOC’s Voices of the Athletes (VOA) outreach programs.

FASANOC feels that it is important that all athletes should compete in a clean sporting environmentand that drug free sport will not only contribute to a level playing field but is a real and positive promotion of the Olympic values of “Friendship, Excellence and Respect.

Drug Free Sport Fiji is currently the organization, established and recognized by FASANOC,as being responsible for all matters relating to Anti-Doping in sports in Fiji.Under the guidance of the Oceania Regional Anti-Doping Organisation (ORADO), Drug Free Sport Fiji Chaperones and Doping Control Officers conduct drug testing at the request of National and International Federations of Sport, in addition to delivering education and awareness advocacy on Anti-doping.