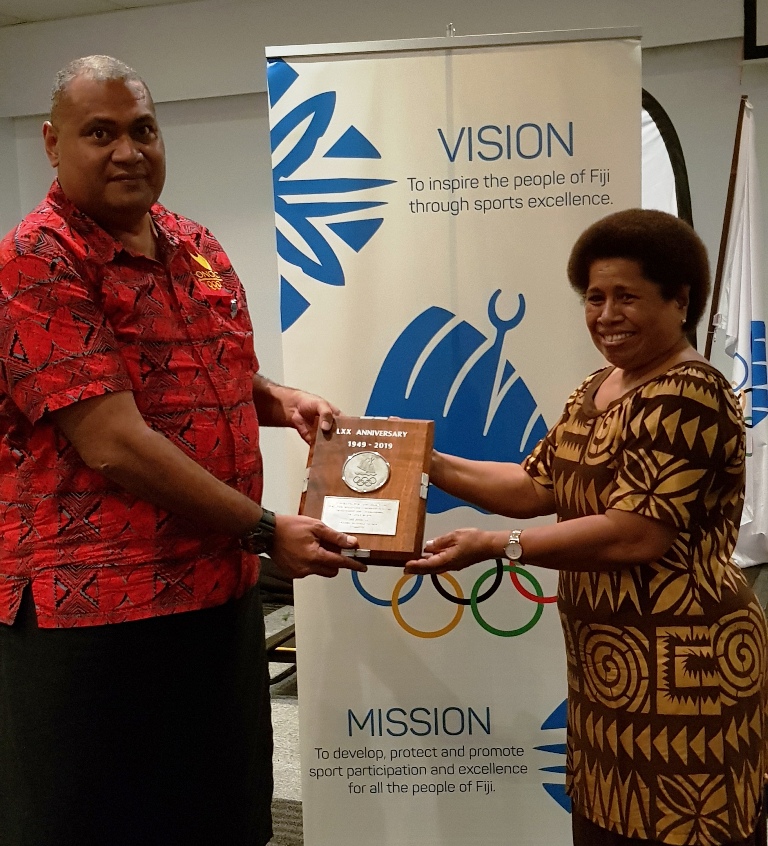 Since the inception of the Fiji Amateur Sports Association in 1949 and having won  1 Olympic Gold medal, 19 Commonwealth medals and 1,405 Pacific Games medals, the Fiji Association of Sports and National Olympic Committee (FASANOC) celebrated its deferred 70th year of existence over the weekend.

In her welcome speech, FASANOC President, Ms Makarita Lenoa, said it was the contribution from all stakeholders that saw FASANOC persevere throughout its 70 year existence.

To mark this milestone, FASANOC called for nominations from its affiliates for its 70th Anniversary Award to recognise individuals who has made significant contributions at the highest level to FASANOC, as well as the development and promotion of Sport and Olympism in Fiji and throughout the Oceania Region.

Mrs Lenoa, on behalf of the FASANOC family,was pleased to announce that International Olympic Committee (IOC) Member in Fiji and FASANOC Life Member, Dr Robin Mitchell, had been selected to receive the 70th Anniversary Excellence in Sports Award.

Mrs Lenoa said an independent panel of  judges which included the then Permanent Secretary of the Ministry of Youth and Sport, Maritino Nemani, Jenny Seeto and Melissa Palombi  had selected

Dr Mitchell, who in their opinion successfully met all the criteria for this award.

"The Panel selected Dr Robin Mitchell for having not only met the criteria but exceeded it in his service to sports in Fiji and the world," Ms Lenoa said.

• Chairman of the Organising Committee for the 2003 South Pacific Games held in Suva, Fiji

• Member of the International Olympic Committee since 1994

• Elected Secretary General of ONOC in 1993

• Chairman of the IOC Olympic Solidarity Commission since 2018

Dr Robin also presented Ms Lenoa with a gift from the 16 other National Olympic Committees that make up ONOC.

The program also included a lively look back through time by FASANOC Life Member and President of the Pacific Games Council, Mr Vidhya Lakhan.   The guests, many of them being of a younger generation of sports administrators learnt about FASANOC’s history from its establishment, the different Games participation, Fiji Olympic House and the volunteer fraternity that makes FASANOC tick.

The dinner followed the deferred FASANOC Annual General Assembly which was held prior to the dinner.