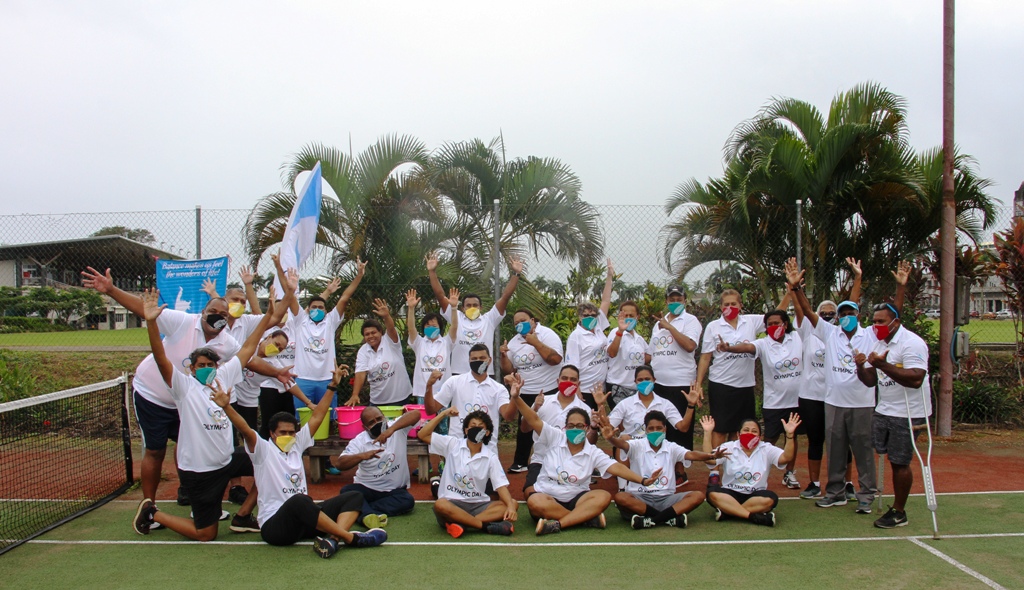 Olympic Day celebrated Internationally was commemorated together in a low key event by FASANOC and ONOC, given the current COVID-19 restrictions in the country.

FASANOC normally hosts an Olympic Day Run to celebrate Olympic Day around the pillars of Move, Learn and Discover.

This year, the IOC set up a digital platform for a virtual Olympic Day with athletes from all over the world taking part in fitness activities encouraging people to #StayActive, #StayStrong and #StayHealthy.

Two of Team Fiji’s athletes, Meli Derenalagi and Winston Hill participated in this celebration. Meli was featured on training video on the Olympic Channel alongside 22 athletes from various countries around the world. Winston on the other hand hosted a live 30 minute exercise on his Instagram handle which was broadcasted by Olympic Channel.

On the home front, Staff from FASANOC and ONOC participated in an hour long team building activity to celebrate the day.

FASANOC President Makarita Lenoa said today on Olympic Day we celebrate “building a better world through sport” in her address to the staff. She also acknowledged the contribution that FASANOC and  ONOC staff make towards not only sports development but issues such as -  Issues such as education, health promotion, HIV prevention, women’s and girls’ empowerment, environmental protection and peace building are some of those issues.”

ONOC President Dr Robin Mitchell acknowledged the role of the media in getting the messages of Olympism out to the public. He also thanked the Japanese Ambassador, H.E Ambassador Omura and his staff for their part in promoting Olympic Day in the region.

“Celebrating Olympic Day may feel very different from all previous years, but at the same time, on this Olympic Day, our message of the power of sport to bring hope and optimism to everyone resonates even stronger,” said IOC President Thomas Bach.

“Let us join together to use this power of sport to prepare for the postponed Tokyo 2020 Olympic Games as a moment of solidarity and resilience of humankind,” he added.