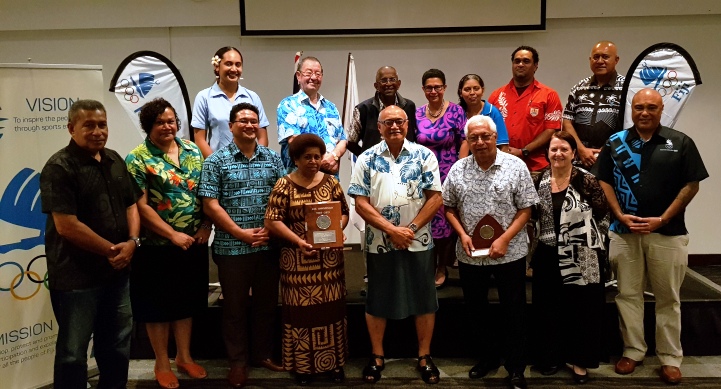 The Fiji Association of Sports and National Olympic Committee (FASANOC) held its deferred Annual General Assembly (AGA) on Saturday, at 3pm, 1 August 2020 at the Holiday Inn in Suva.

The General Assembly had been scheduled to be held on April 29, 2020 but had to be deferred because of the COVID-19 restrictions.

With the easing of restrictions, the AGA was held last week and it served as:

1. AGA and election of new board members

Ms Nagera replaces Mr Kado as VP Finance and Mr Naivalurua and Ms Narayan replace Mr Joseph Rodan Jnr who did not stand for re-election and Mr Harvie Probert, who had served the maximum term of eight years on the Board as stipulated in the FASANOC Charter.

FASANOC President, Mrs Makarita Lenoa, welcomed the new board members and said that she is grateful to the incoming EB Members for agreeing to volunteer their expertise and experience for the betterment of sport.  She said that she is confident that these elected Board members will provide diverse views and expertise that will further FASANOC’s collective vision to inspire the people of Fiji through sports excellence.

The 2020 Annual General Assembly has led to an increase of female representation with the EB now comprised of 6 women and 3 men.

Mrs Lenoa also took the opportunity to thank Mr Kado for his valuable contribution as VP Finance and acknowledged the significant input towards FASANOC’s continuous development by Mr Probert and Mr Rodan Junior.

A brief synopsis of the incoming Executives are as follows:

Ms Finau Nagera – Ms Nagera is currently the Assistant Auditor General at the Office of the Auditor General of Fiji. Ms Nagera has a Masters in Forensic Accounting from the University of Wollongong, Australia and has previously served the Fiji Institute of Accountants as a council member and also as the President.

Ms Prem Narayan – Ms Narayan is a Legal Practitioner having setup her practice in Suva in 2002. Ms Narayan has a Bachelor of Law Degree from the Victoria University of Wellington, New Zealand.

Mr Ioane Naivalurua – Mr Naivalurua is a retired civil servant having held the post of Permanent Secretary at the Ministry of Foreign Affairs from 2017-2019 and was the Ambassador of Fiji to the People’s Republic of China. He is currently the President of Basketball Fiji.

Mr Jerome Kado – is a senior partner at PwC and has served FASANOC previously as the Vice President Finance for a maximum eight-year term from 2012 - 2020. Mr Kado is a former President of Fiji Swimming and the Fiji Institute of Accountants.

FASANOC also invited nominations for a new Excellence in Sport Award. The Award recognises individuals who have made significant contributions at the highest level to FASANOC, as well as the development and promotion of Sport and Olympism in Fiji.

The recognition award was based on the following minimum criteria;

• Provided a minimum of 20 years of service in the development of sports.

• Extraordinary services provided over a shorter period of time which resulted in the attainment of the highest level of recognition shall be eligible for consideration.

• Any individual nominated shall be of high moral character and integrity and shall be a well respected member of the sporting community nationally, regionally and internationally.

• All candidates shall be free of any criminal conviction and must at all times maintain the highest sporting ethics and be generally perceived to be possessing an attitude and ability of good and fair sportsmanship.

The nominations received were judged by an Independent Judging Panel which included the then Permanent Secretary of the Ministry of Youth and Sport, Mr Maritino Nemani, Ms Jenny Seeto and Ms Melissa Palombi.

The Panel selected Dr Robin Mitchell for having not only met the criteria but exceeded it in his service to sports in Fiji and the world. Dr Mitchell’s outstanding achievements include:

• Chairman of the Organising Committee for the 2003 South Pacific Games held in Suva, Fiji

• Member of the International Olympic Committee since 1994

• Elected Secretary General of ONOC in 1993

• Chairman of the IOC Olympic Solidarity Commission since 2018

The event ended with a commemorative dinner for National Federation delegates and invited guests.