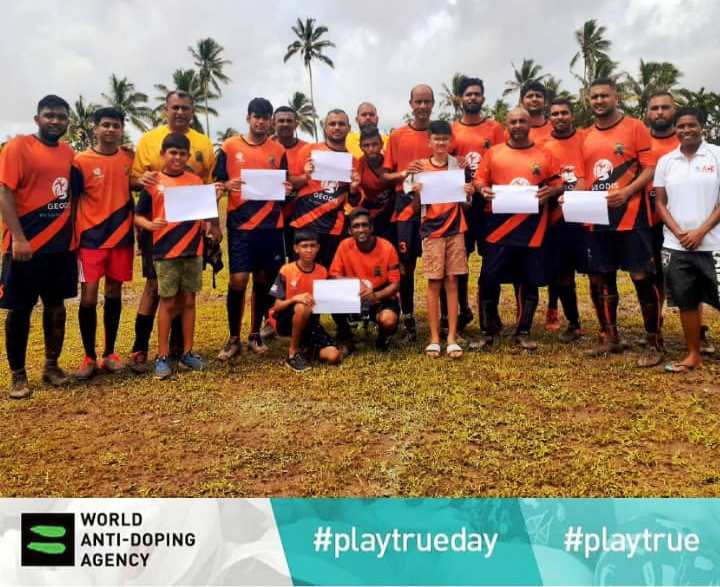 FASANOC through its Athletes and Communities Engagement(ACE) Programme has been at the forefront of promoting clean sport during its outreach programmes which are held at sporting events and at community engagements.

The ACE Programme serves FASANOC's vision to "Inspire the People of Fiji through sporting excellence" through its purpose which is to encourage, engage and empower athlete leaders and communities in Fiji using national athletes known as Champions to advocate and inform the public on the Olympic Values, True Spirit of Sport and Social Messages that also includes "Play True".

Athletes, but also National and Regional Anti-Doping Organisations, Sports Federations, governments, Major Event Organisers (MEOs)and other anti-doping stakeholders from around the world have been invited to answer the question: “What does Play True mean to you?”, which is this year’s theme of Play True Day.

Champion and Basketball Rep Leah Seru said Play True for her meant being respectful of the sport and her teammates.

ACE Coordinator Jeegar Bhavsar said it was important for the programme to raise awareness among athletes, the sporting public and stakeholders about the importance of protecting clean sport through its "Play True" advocacy component.

"This year we were fortunate to share the "Play True" component with the Fiji Women’s Rugby Sevens team that is preparing for the Olympic Games later this year," he said.

"We were also able to share the same "Play True" component with communities along the Suva-Nausori corridor in March this year."

Since 2014, Play True Day has been celebrated every year in April by the IOC, WADA and the anti-doping community worldwide.

The IOC joined WADA in encouraging athletes to take part in the #PlayTrueDay social media campaign and make their own Play True Pledgeon their handles.

To protect clean athletes, the IOC has implemented several programmes and initiatives, such as a comprehensive pre-Games testing programme, a long-term programme to extend the storage of pre-Games samples to10 years, and the reanalysis of samples from past Games.

With little more than 100 days to go to Tokyo 2020, theIOC wants to reaffirm the importance of the fight against doping, and is working closely with WADA and the International Testing Agency (ITA) to allow athletes to compete in a fair and safe environment in Tokyo.

The most extensive pre-Games anti-doping programme in the history of the Olympic Games is being implemented for Tokyo 2020.

In addition to providing assistance for the anti-doping programme that will be coordinated by the ITA during the Games, WADA is also ensuring that the accredited laboratory in Tokyo will be prepared for the challenge that awaits it.

With regard to COVID-19 vaccines, WADA clarified its positioning on 11 December 2020. The agency is highly recommending them, and they are not known to contain any Substance or Method on the Prohibited List or to interfere with anti-doping analysis.