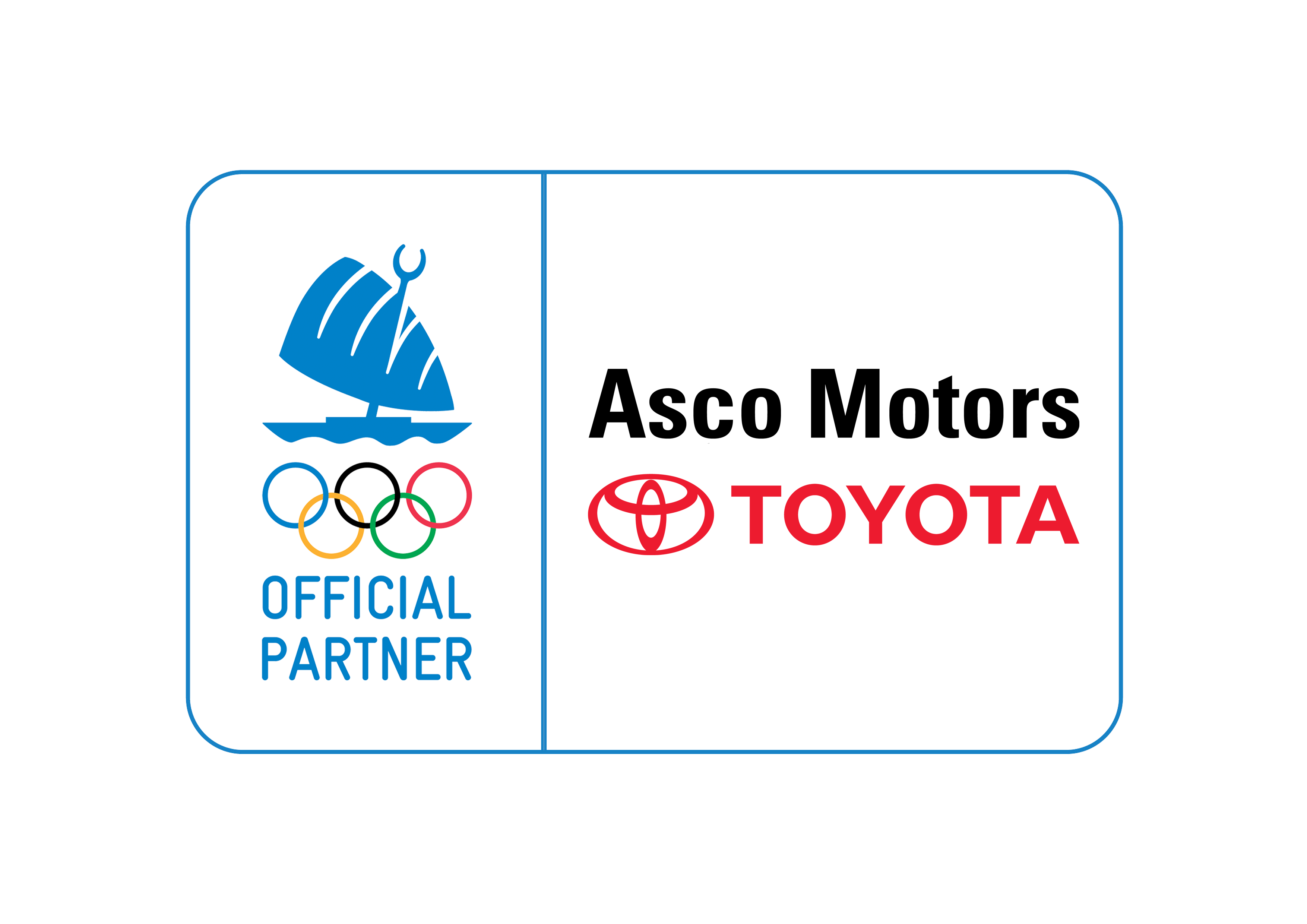 Toyota is one of the leading sponsors of this year's Olympic and Paralympic Games, in the mobility category, which includes vehicles, mobility services and mobility solutions.

Commenting on the sponsorship when Toyota first signed with the IOC in 2015, Toyota said: "We will do everything possible to fulfill our new role in The Olympic Partner program, and justify the trust the IOC has placed in us. The addition of a mobility category to the TOP Partner field is an important recognition for our entire industry. Under this Olympic flag, let us today reaffirm the power of sports to bring people together. And let us dedicate ourselves to creating a better world by promoting sports in the Olympic spirit of friendship, solidarity, and fair play."

ASCO Motors, who is partially owned by Toyota Tsusho South Sea Limited, reiterated this by joining FASANOC on their existing partnership.

Mr. Craig Sims Chief Executive Officer of ASCO Motors said, “as Fiji’s most innovative automobile provider and as an active member of the community, we relate to the messages relayed in these PSA’s.”

“I echo Toyota’s message when they joined IOC that there is power in sports as it shows human achievement and accomplishment and this association contributes to our on-going engagement with the community, said Mr. Craig Sims.”

ASCO Motors has been a FASANOC Partner since 2017 and its most recent activation was the donation of a Toyota Hilux, a 40 Horsepower Yamaha Outboard engine and Bridgestone Tyres as main prizes for the fundraising lottery for the 2019 Pacific Games in Samoa. ASCO also provided 5 vehicles to FASANOC to use for the Commonwealth Games Queens Baton Relay in 2017.

In September 2020, FASANOC’s Voices of the Athletes (VOA) program, through funding from the International Olympic Committee (IOC), recorded 14 Public Service Announcements (PSAs) for a television campaign to advocate on its key messages of Be a Leader, Play True, Play Safe and Go Green which were aired on National TV.

Lorraine Mar, FASANOC CEO, thanked ASCO Motors for the continuation of this partnership. “We believe that these VOA PSA’s have been well received, not only by our communities but also by the greater Olympic Family, as the messages they contain can be related to by other countries who face the same issues.   To have these aired again, through this partnership affirms that we’re doing the right thing, she said.”

“TV right now is an important medium in Fiji as we battle COVID-19 and to have our messages seen throughout the country at this time is uplifting. I admit this situation is unprecedented however the messages of Play True, Go Green, addressing NCD’s, Drugs awareness still holds true”, said Lorraine.

'Play True' - focuses on anti-doping and the use of drugs in sports and Drug Awareness on types of drugs, their effects and how the community can work together to promote a Drug Free Community.

'Go Green' - focuses on minimizing the use of single use plastic bags and the 5R's which are Refuse, Reduce, Reuse, Recycle and Repurpose

"Stay Healthy’- focuses on the causes, effect and prevention of Non-Communicable Diseases (NCDs), which is a major concern in Fiji

The ASCO Motors VOA TV campaign also focuses on Climate Change, Equity and Inclusion. We are proud to have Etika Naqio, our VOA Champion, who is hearing impaired and Jone Bogidrau, an amputee, who has represented Fiji in Para-athletics as an amputee.

The campaign also emphasizes the Olympic Values of Excellence, Friendship, Joy of Effort, Balance of the Body, Mind and Will, Fair Play and Respect.

One of the messages features ASCO’s own, Hector Smith Jnr who has been employed for the last 17 years and is currently employed as a Yamaha Fixed Operations Manager.

Hector said, “I’ve always advised my colleagues of these messages that I advocate on as part of Voices of the Athletes program, and I am pleased that my employer is supportive of this”.

Hector has been a national rep and is the Captain of the Men’s Hockey team from 2011 till today.

The campaigns started airing on Fiji TV from 23rd May 2021 and will play for three months ending on 22 August 2021, after the Tokyo 2020 Olympic Games.   FASANOC thanks ASCO Motors for taking this initiative to reach out to the community during these challenging times.