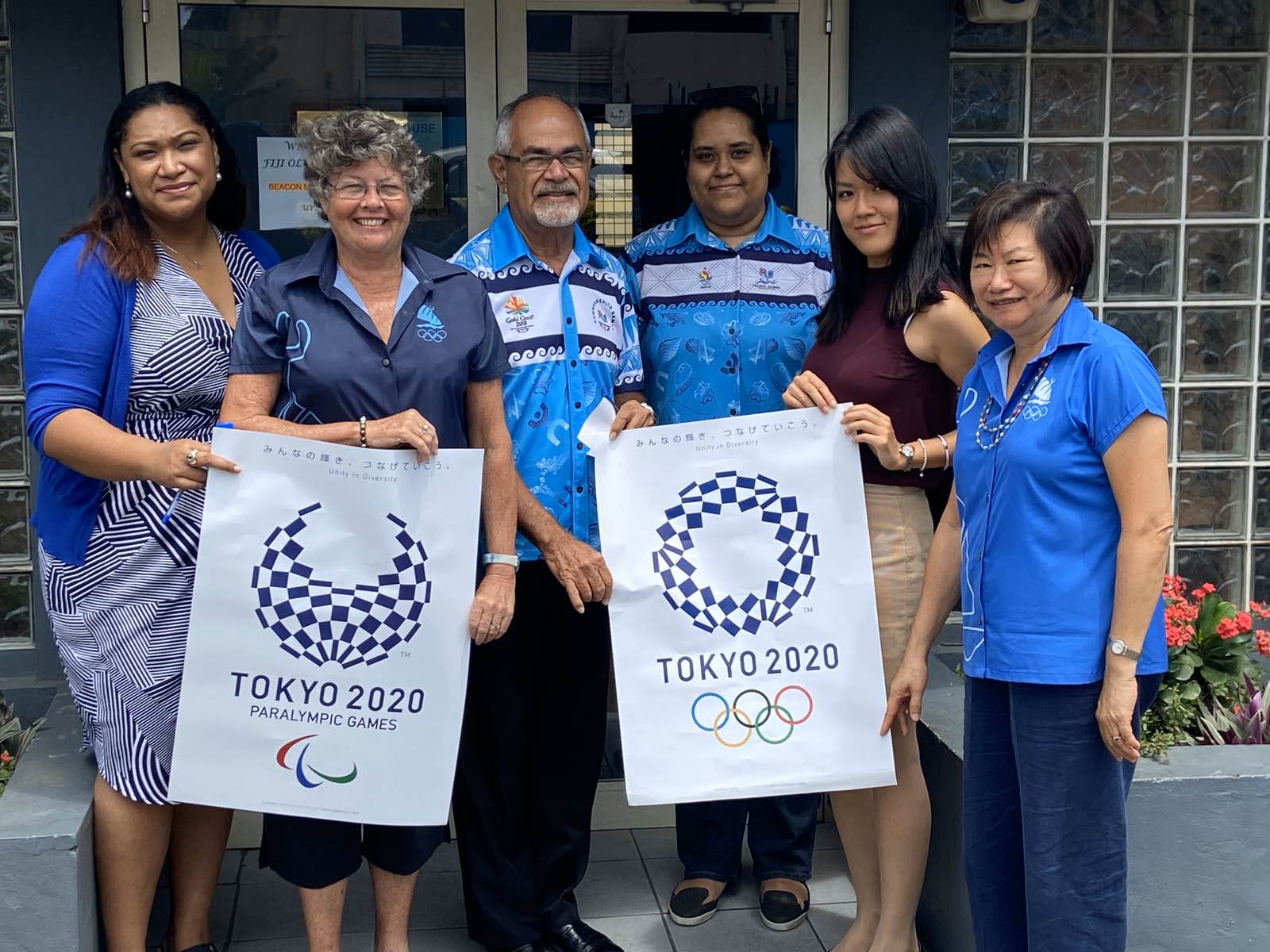 A delegation from the Japanese Embassy led by Embassy Adviser Chizuru Horiba paid a visit Fiji Olympic House yesterday, to discuss opportunities for possible collaboration with Team Fiji before the Tokyo 2020 Olympic Games.

FASANOC’s Sponsorship and Marketing Manager Ritesh Ratiram said they welcomed the opportunity to collaborate with the Japanese Embassy and would look at how both Team Fiji and the Japanese Embassy could benefit from working together for a successful build up to the Games in Tokyo.

"Discussions included possible collaborations for cultural programmes amongst other things," he said.

Also in March during the Japanese Film Festival, there will be an opportunity for the public to take part in some activities being planned by the Embassy.

Team Fiji hopes to take a team size of close to 50 plus athletes, coaches and team officials should all the sports be successful in qualifying for the Olympic Games.

The team is likely to depart Fiji on the 17th of July with Team Fiji Rugby Sevens Men and Women expected to be in Japan earlier for a pre-Games training camp. This is to be confirmed by team officials.

Team Fiji Chef de Mission Patrick Bower along with Team Fiji Administrator Jane Niubalavu will form the advance  party who plan to be in Japan earlier than the 17th of July, 2020.

Last year Mr Bower confirmed that the city of Oita had been selected as Team Fiji’s host for pre-Games training camps to give the athletes the opportunity to acclimatize to what is expected to be scorching heat during the Games.  The city of Oita will accommodate and facilitate Team Fiji’s preparation in the lead up to Tokyo 2020 Olympics, he said.

He said, "Team Fiji will also benefit greatly from the high standard of venues available in the city of Oita for the sports that Fiji will be participating in Tokyo. "

"This cost we would otherwise be unable to afford and thus not have the best possible approach to the Games," said Patrick.

"It is also an opportunity to participate in pre-Games competition and also to focus on what Team Fiji would like to achieve without too many distractions," he said.

Judoka's Tevita Takayawa will have to prove himself in the International Judo Federation ranking competitions being held in France and Germany in February.

Archery Fiji will also get an opportunity to qualify athletes at the Oceania continental qualifying tournament to be held in Fiji in April.

Two-time Olympian Robert Elder along with Olympians Matelita Buadromo and Sally Yee will all be vying for another opportunity to participate at another Olympic Games in July, 2020.

Meanwhile the sport of Swimming and Athletics have two and one universality places respectively, however Mr Bower has encouraged athletes to try and do their best to qualify on merit so they may challenge themselves to do better at the Games rather than just participating.

The sport of Rugby Sevens will take place from 27 July to 1 August at the Tokyo Stadium and in a reverse to the Rio 2016 Olympic Games schedule, the men's competition will be played first over three days from July 27–29 with the women's competition taking place from July 31 through August 1 and culminating with the gold medal session on Saturday which is being dubbed "Super Saturday", as a lot of Olympic medals are on offer that day.

Athletics at the 2020 Summer Olympics will be held during the last ten days of the Games, from 31 July – 9 August 2020, at the Olympic Stadium.

The swimming competitions at the 2020 Summer Olympics in Tokyo will take place from 25 July to 6 August at the Olympic Aquatics Centre.

Boxing competition will begin on the 25th of July with Archery beginning a day earlier.

Other sports like Judo, Boxing, Table Tennis and Karate are finalizing their competition programmes.

FASANOC looks forward to collaborating with the Embassy of Japan in promoting Team Fiji, its participation at the Games and  the Tokyo Olympic Games in July 2020.