Tokyo 2020 came to an end on 08 August and Team Fiji came home with the most number of medals from any Olympic Games. 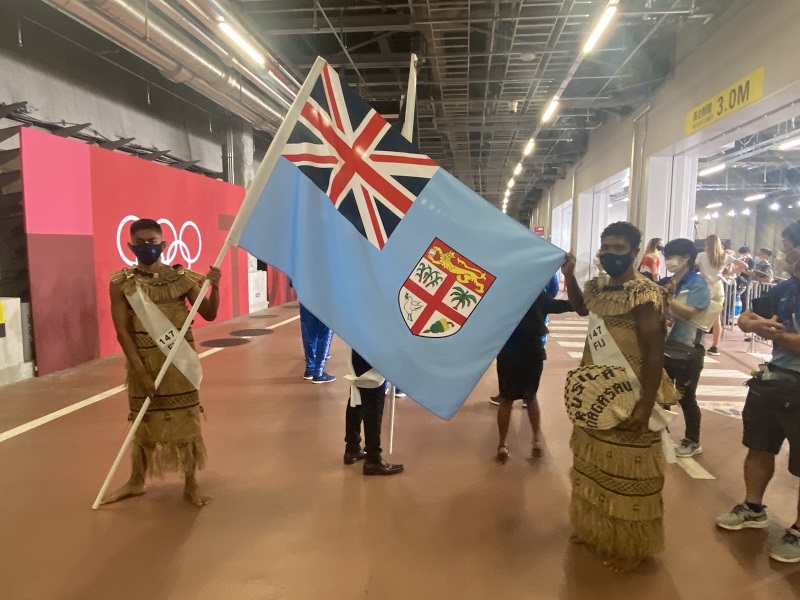 Tokyo 2020 came to an end on 08 August and Team Fiji came home with the most number of medals from any Olympic Games. Rio 2016 saw us bag our first ever Gold medal and we have been able to maintain and add to this tally.

Team Fiji was represented by 34 athletes in 6 sports with 26 members of Team Fiji winning a medal.

“This is perhaps, our greatest achievement in sports so far, with Fiji winning 2 medals, a Gold and a Bronze in Rugby Sevens”, said Team Fiji Chef de Mission, Patrick Bower.

“With Covid affecting Fiji the way it has and athletes not being able to train or training away from their loved ones for five straight months, this doesn’t get any sweeter”, said Patrick.

Bower also applauded the team for observing the guidelines of the Playbook and coming back home safely. “We had done a lot of work in the lead up to the Games and during the Games to ensure each member was safe” and that we’ve all come back as a team is a testament to everyone in the team for respecting the rules of the IOC, the Organising Committee and also respecting each other”, he said.

It has been my absolute pleasure to be Chef for this Games, he said.

I also congratulate the Japanese Government, the Organising Committee and the Japanese people in putting up the Games despite COVID-19 running rampant and ensuring that we were all safe but also that we had a good Games experience, said Bower.

Here is a breakdown of Team Fiji’s performance at Tokyo 2020.

Banuve Tabukaucoro ran equal 3rd with a time of 10.59. This was his season’s best run and qualified for Round 1

In the Men’s 100kg Elimination round of 32, Tevita Takayawa lost to Serbia’s Aleksandar Kukolj 10-0 and was eliminated.

The Rugby Men’s Team successfully defended their Gold medal from Rio 2016 with a win against New Zealand in a tough final.

The Women’s team after losing to France in the Pool B match successfully worked their way into the 3rd place playoff and defeated Great Britain for Fiji’s first ever Bronze medal in the Women’s category at the Olympic Games.

Team Fiji’s youngest athlete, Sophia Morgan competed in the Laser Radial Women’s Sailing Competition and finished 42nd after 10 races. This has been an exceptional Games for her and is now focussed on bettering her position at Paris 2024.  Sophia’s results were as follows;

Taichi Vakasama competed in the Men’s 200m Breaststroke where he finished 4th in Heat 1 with a time of 2:17.35. He did not qualify for the semi-finals.

Cheyenne Rova competed in the Women’s 50m freestyle where Cheyenne finished third in heat 5 with a time of 27.11. Cheyenne did not qualify for the semi-finals.

Sally Yee lost to Chelsea Edghill of Guyana in the Women’s Singles Preliminary Round, 4 sets – 1 .

USA finished the medal tally in first place by edging out China by 1 Gold medal. China and Japan, the host-country, were closest to matching the American gold-medal haul, winning 38 and 27 Gold medals, respectively.

In the total medal count, China finished in second with 88 medals, followed by the Russian Olympic Committee with 71 medals.

With its Gold and Bronze medal wins, Fiji finished 59th equal with Estonia, Latvia and Thailand out of a total of 206 contingents at Tokyo 2020, the 206th nation being the Refugee Team who competed under the IOC flag.   While Fiji is proud to join 93 countries who won medals at Tokyo 2020, Team Fiji also acknowledges the participation of 113 nations whose contribution to a successful Games is just as important.

Team Fiji congratulates all who qualified and participated in Tokyo 2020 and thanks the National Federations who supported their athletes’ preparations during these unprecedented times.   A special thank you to the Tokyo 2020 Organising Committee, the thousands of volunteers, the IOC, Olympic Solidarity, the Australian Olympic Committee and the #PacificAusSport program and Team Fiji Partners for their wonderful support.

Team Fiji will now focus on the Games for 2022, the Pacific Mini Games being held 17 – 25 June in Saipan, Northern Marianna Island and the Birmingham 2022 Commonwealth Games being held 28 July – 8 August in England.