IOC President Thomas Bach is expected to visit Fiji in May to attend the Oceania National Olympic Committee (ONOC) General Assembly scheduled to take place from May 3 to 8, 2022 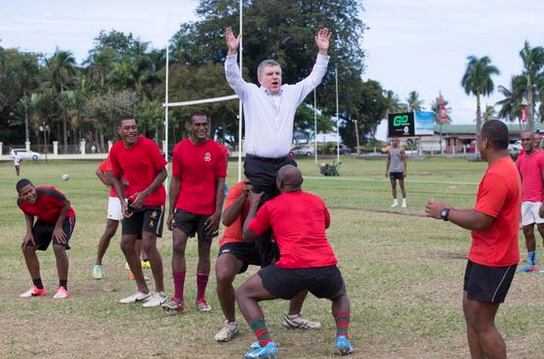 The General Assembly is scheduled to take place from May 3 to 8, where ONOC will celebrate its 40th anniversary and open its new headquarters in Suva.

Bach previously visited Fiji back in 2015.

The Northern Marianas Islands is due to stage the Pacific Mini Games from June 17 to 25 this year, with competition taking place in Saipan.

Athletes from Oceania will then participate at the Birmingham 2022 Commonwealth Games from July 28 to August 8.

ONOC members have also been invited to participate in the Hangzhou 2022 Asian Games, following an offer from the Olympic Council of Asia in 2018.

Oceanian athletes will compete in triathlon, athletics, wushu, roller skating and weightlifting events at the Games, where they will receive "honorary" medals should they finish in the top three.

Blas said the Games offer several opportunities for athletes in the build-up to the Paris 2024 Olympic Games.

"The Oceania sport sector can also look forward to a vibrant, games-filled period in the Road to Paris 2024, notwithstanding the COVID-19 pandemic," Blas said.

"This, and a host of opportunities, are particularly important to athletes in Pacific Island countries and territories.

"Next year we have the Asian Beach Games in Sanya, China; the Asia Indoor and Martial Arts Games in Bangkok, Thailand; and the Solomon Islands 2023 Pacific Games in Honiara.

"These are all on the Road to the Paris 2024 Summer Olympics."

Tonga was hit by a deadly volcanic eruption and tsunami in January.

The eruption of Hunga-Tonga-Hunga-Ha'apai, an underwater volcano, occurred on January 15.

The eruption was the biggest recorded since Mount Pinatubo in the Philippines in 1991.

A subsequent earthquake and tsunami had left much of Tonga unable to communicate with the outside world.

The Association of National Olympic Committees (ANOC), led by ONOC President Robin Mitchell, vowed to help the nation as best it could.

Blas has said ONOC will also support recovery efforts in the nation.