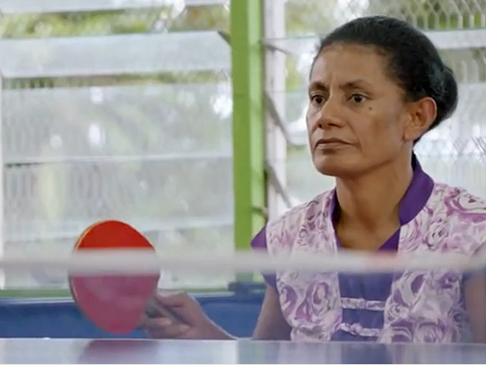 Team Fiji’s Mere Roden has become one of the most recognisable and successful athletes in the Pacific. A Rio 2016 Paralympian and multiple Pacific Games gold medallist, the 51-year-old has enjoyed a rapid rise through the ranks of table tennis since discovering the sport through an Australian Government-funded program.

Roden was introduced to para table tennis in 2014 through the Smash Down Barriers program, which is run by the International Table Tennis Federation - Oceania in partnership with the Fiji Table Tennis Association, and funded by the Australian Government through the Pacific Sports Partnerships.

In 2015 she became the first Fijian player to participate in an international para table tennis tournament, and the following year she competed at the Rio 2016 Paralympic Games (Fiji's first para table tennis player to do so). As she continues to collect top honours on the court, off it she has become an advocate for para sport in the Pacific, and was recently elected the Oceania Paralympic Committee athlete representative.

“Anything is possible,” reflects Roden. “I came into table tennis through Smash Down Barriers and, when I took the first step of going overseas and beat Australia’s number one Rosalie Turnbull in 2015, I sort of became a public figure,” she explains.

“I was over 40, going on 50 when I started table tennis and within that short period of time from late 2014 to 2016 I was at the Paralympics. It’s just up to the individual. If you’re committed, then it pays off.”

An estimated 85 per cent of players in the region discovered the sport through the Smash Down Barriers  program, and many, like Roden, have gone on to represent their country.

Fresh from gold medal success at the Samoa 2019 Pacific Games, where she defended her title in the women’s seated singles, Roden’s next goal is to get more women in wheelchairs to take up the sport.

The Paralympian would like to see more women in wheelchairs across the Pacific benefit from the same opportunities that para table tennis has given her, while also desiring an increase in the number of competitors to strengthen the sport in the region.

At the age of 51, Roden is defying community expectations in Fiji about the demographic of international sportswomen. And although age is proving no barrier to her performances, she wants to see younger people follow her example, and that of her 61-year-old teammate, Latu.

“Sometimes we feel like we’re on our own, because we are in these (wheelchairs) and people have a different perspective towards us. But we are not doing this for ourselves, we are doing this for the others who are coming behind us, the younger ones.

“The only reason I’m holding onto this sport is that I love it, but at the same time I know that I’m getting older and I’m doing it because I’m thinking of other women with disabilities. It’s always in my heart that one day I will see maybe five women in wheelchairs playing table tennis at the Pacific Games.”

For more information you can visit the DFAT Website : https://dfat.gov.au