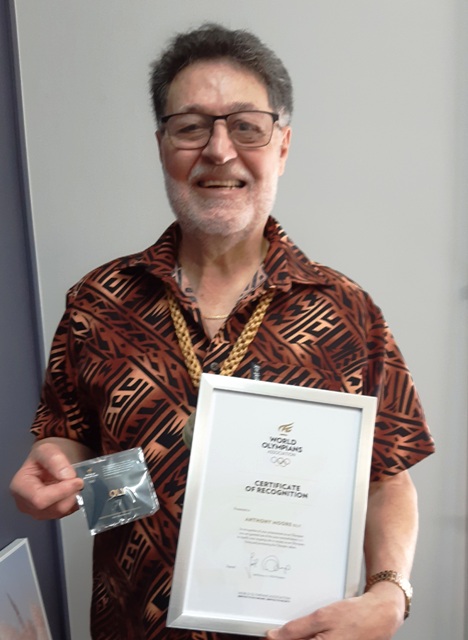 In an effort to strengthen the Olympian alumni, the World Olympians introduced the post nominal designation ‘OLY’ in 2017 which gives athletes 24/7 public recognition of their years of hard work, dedication and promotion of the Olympic values.

Mr Moore is an Olympic long jumper who competed for Fiji  at the 1976 Montreal Olympic Games, Canada. In 2009, he was inducted into the Fiji Sports Hall of Fame.

Mr Moore is also a poet, with works exhibited by the Art of the Olympians.

In November 2017 at the 8th International Olympic Committee (IOC) International Athletes' Forum, the World Olympians Association, with the support of the IOC Athletes' Commission, announced the OLY post-nominal letters initiative.

The initiative allows Olympians to use the OLY lettering on any official documentation after their name much like when one gets a royal honour or PhD," said Fiji Olympians Association President Carl Probert.

"In addition to the letters, athletes will receive a World Olympians Association certificate celebrating their achievements when they apply for the title. "

Carl said the initiative was open to all athletes who have competed at the Olympic Games and who uphold the values and practices of the Olympic Charter and the World Olympians Association Code of Conduct.

"This includes receiving an OLY pin and a certificate. Any Olympian can get the certificate and an Olympian.org email just by registering," Carl said.

"The WOA then responds with copy of certificate to print.

"We have tried to make it a little more special by presenting in person where we can and our presentation to Mr Moore is an example of it," he said.

Carl said they were trying to organize this for the returning team from Tokyo 2020 but were not able to coordinate an event.

"OLY is just like PhD, MD and other post nominal's and can be used on business cards, CVs, social media, in fact anywhere you use your name," said Joël Bouzou OLY President, World Olympians Association.