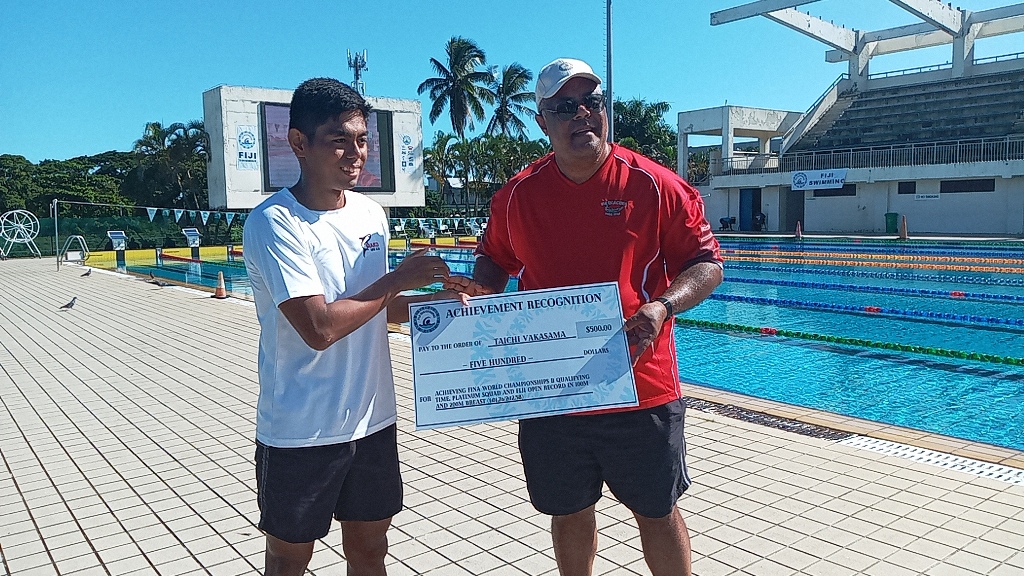 Fiji Swimming president Ben Rova presented Olympian Taichi Vakasama with a recognition award as well as financial assistance for all his hard work which culminated in the swimmer setting several records at the Fiji Swimming Open Nationals 2022 and qualifying for the FINA World Championships in Budapest, Hungary in July.

The Vanuabalavu swimmer managed to set his platinum time in the 200m breaststroke record of 2 minutes 12.58 seconds during the Fiji Swimming Open Nationals at the Damodar City Aquatic Centre in Suva over the weekend.

"You are the first swimmer to achieve a platinum time, and what you achieved is a culmination of all your hard work."

As part of the recognition, Swimming Fiji handed over a cheque of $500, which Ben said was to help Taichi continue to achieve his targets of qualifying for the Olympic Games, on merit.

"This presentation is in recognition of all your achievements and we would like to acknowledge that," said Ben.

Ben said they were impressed with the character that Taichi has shown juggling his studies and his swimming.

"Taichi continues to improve his times and despite the challenges he continues to put in the hard work and effort which is also a testament to his coach," he said.

Taichi is coached by Marlene Vuniwaqa who kept a close eye on the progress of the 22-year-old medical student.

“It has been very challenging for the past two years due to the pandemic and now that everything is back to normal, we’re happy to back in the pool," she said.

Meanwhile Ben said he is impressed with the national training squad members as they continue to push each other for an opportunity to represent the country at the upcoming Commonwealth Games and the 2022 FINA World Championship.

"We also have athletes who have been competing consistently overseas and it is encouraging to see everyone working hard and fighting for that chance to represent the country," he said.

Ben said swimmers like Olympians Taichi and Cheyenne Rova have been influential with fellow swimmers and leading by example.

The Commonwealth Games will be held in Birmingham, England from July 28 to August 8 while the FINA World Championships will be staged from June 18 to July 3 in Budapest, Hungary.

Ben said they were hoping to send eight athletes to the Commonwealth Games.