FASANOC extends deepest sympathies to the family of Mr Satyanand who passed away in New Zealand this week. 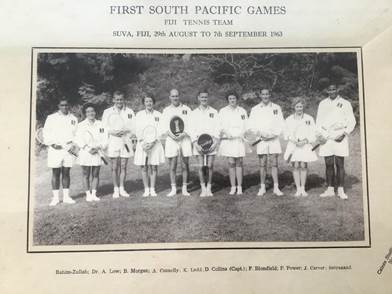 FASANOC extends deepest sympathies to the family of Mr Satyanand who passed away in New Zealand this week.

Satyanand actively participated in sports from the 1950s to the 1970s and represented Fiji in Cricket, Tennis and Football.  He also played Hockey at district level and Lawn Bowls.  In his nineties he also actively played bridge.

In an interview in 2020 Satyanand said his best memory was when the Fiji Cricket Team captained by the Late President, Ratu Sir Kamisese Mara, beat the West Indies by 12-runs in a one-day international in Suva in 1956.  Satyanand was an all-rounder cricket player with his strength in fielding however he switched to bowling when playing with his Samabula Club.  He was Secretary of the Suva Cricket Association for a short term.

During his hockey playing days in the 1950s Satyanand played full-back for Namoli Sports Club and then in Suva played for the Shamrock team for 20 years.  Former President of FASANOC, Vidhya Lakhan had the pleasure of playing both Hockey and Tennis with Satyanand and described him as being ‘being a gentle giant on the sporting field, a very formidable opponent, a very determined athlete who excelled in all sports he participated in”.

Football was where Sayanand shone.  He played full-back for Natabua High School in Lautoka before moving to Suva where he played from 1951-1961 when Suva won the IDC five times.  He was in the winning Suva Team when they won the King Irvin Cup in 1954 and the McIlwain and Lady Garvey Cup in 1960.  He made his international debut against New Zealand in 1952.  After playing Football he coached both the Lautoka and Suva Teams.  As coach of Lautoka they beat Suva for the Pala Cup 7-0.

Satyanand represented Fiji in Tennis at five South Pacific Games, as they were known then.  He played in the inaugural Games in Suva in 1963 he played in the doubles event and helped Fiji win the Gold Medal, the only Gold Medal that Fiji Tennis has won at any Pacific Games  He played and won medals in the following four Games 1966 New Caledonia, 1969 Papua New Guinea, 1971 Tahiti and 1975 Guam.  He was President of the Lawn Tennis Association for five years in the 1970s and was General Manager (now known as Chef De Mission) of the Fiji Team to the South Pacific Games in 1983 in Samoa.

In remembering Stayanand, FASANOC celebrates his life as a gifted athlete and sports administrator and we also acknowledge his contribution to Fiji as a dedicated Civil Servant that included his time a Fiji’s High Commissioner in New Zealand.

May he rest in peace.