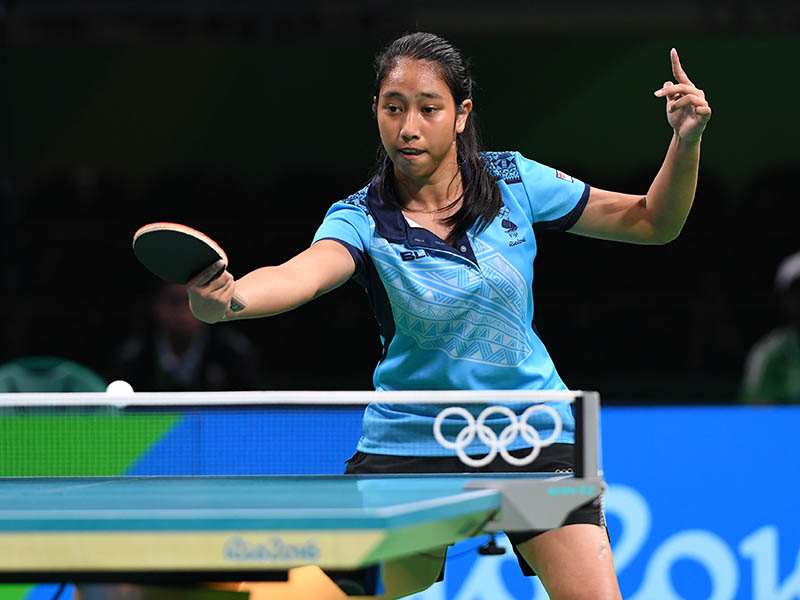 Fiji Table-Tennis Associations Acting President, Narendra Lal, said “This is fantastic news for Sally and for Table Tennis”. We’re very happy with this news and congratulate Sally in securing a spot for Tokyo.”

This will be Sally’s second Olympic Games, having made her debut at the age of 16 as the baby of Team Fiji at the Rio 2016 Olympic Games.

Sally gave birth to a baby girl earlier this year and continued to train throughout her pregnancy and was actively involved with both table and personal training until few days before she gave birth.

With the current COVID-19 restrictions, Sally continues to train at home with her sister Grace and under the watchful eyes of her Mother and Coach, Harvi Yee.

FASANOC CEO, Lorraine Mar also congratulated Sally for her qualification. Sally has had an incredible year with having to return from Japan due to COVID-19 where she had been on a joint IOC and Japanese Olympic Committee educational and training scholarship. Despite not having much international competition, her Oceania ranking established in 2019-2020 season has worked to her advantage.

Tevita now awaits rankings from World Karate Federation to see if he has been able to secure an Oceania spot for Tokyo.

Tevita and his coach, David Qiolevu will now make their way back to Australia to attend a training camp and may join the team travelling to Tokyo from there, if qualified.

This has been made possible through the PacificAus Sports program which was recently announced by the Australian Government and through which the Rugby 7s Men and Women teams, as well as Athletics Fiji and Fiji Swimming athletes are currently training and competing in Australia.

Fiji Judo’s Tevita Takayawa, also in his final stages of qualification, competed at the World Senior Judo Championships in Hungary on Friday 11th June. Tevita beat his first opponent from Australia before losing in the second round to Michael Korrel of the Netherlands. This was an important competition for Tevita to score final ranking points for Tokyo 2020 that were bolstered by him winning the first round.  Again competition was tough with his opponent going on to win Pool C.

Based in Japan, Tevita is currently ranked number one on the Oceania list for selection to Tokyo and is awaiting confirmation by International Judo Federation of his participation in Japan.

Our four other athletes, Swimmers Cheyenne Rova and Epeli Rabua and Athletics Banuve Tabakaucoro and Eugene Vollmer are currently in quarantine in Sydney and Brisbane respectively. Team Fiji has been receiving regular updates from them including their in-room training schedules, the view out of the room and their mental state.

All of the above athletes including Karate’s Tevita have been working with Team Fiji psychologist, Krishneel Maharaj in their preparation.

These 4 athletes upon clearing quarantine will start competing in local competitions against other Australian athletes who are also prepping for Tokyo 2020.

Rugby Men’s and Women’s teams have been training in Sunshine Coast, Queensland and will compete in the PacificAus Sports Oceania 7s competition in Townsville, Australia from June 25-27.

FASANOC is very grateful to the Australian Olympic Committee and DFAT who have provided the opportunity and financial support for all the athletes to train and compete in Australia which will greatly assist their Olympic Games preparation and selection.

World Archery Fiji still awaits a decision to see if an archer from Fiji has made the team. The squad members based in both Fiji and Melbourne have been greatly affected by COVID-19 with lockdowns and the inability to train and compete.

Should all the sports qualify, Team Fiji will be represented by 34 Athletes at Tokyo 2020 from 8 different sports.

Chef de Mission to Tokyo 2020, Mr Patrick Bower said, we are now liaising with the Ministry of Health to organise the second jab for the COVID vaccine and the recommended testing as required by the Tokyo 2020 Organising Committee for participation in Japan.

At present, all Team Fiji’s Australian based athletes will fly into Nadi from Sydney on the 08 July where they will remain in transit and be joined by the Fiji contingent at the airport and then travel directly to Tokyo on the same day.

This will then avoid quarantining in Fiji.

The COVID related challenges are varied and many but we’re working through them and communicating all plans and expectations on a regular basis, said Patrick.
Tokyo 2020 will be a Games like no other but we shall persevere and we thank you, the people and Team Fiji’s biggest fans for your support.

Above all we take our hats off to the athletes, for their resilience and dedication in these challenging times.