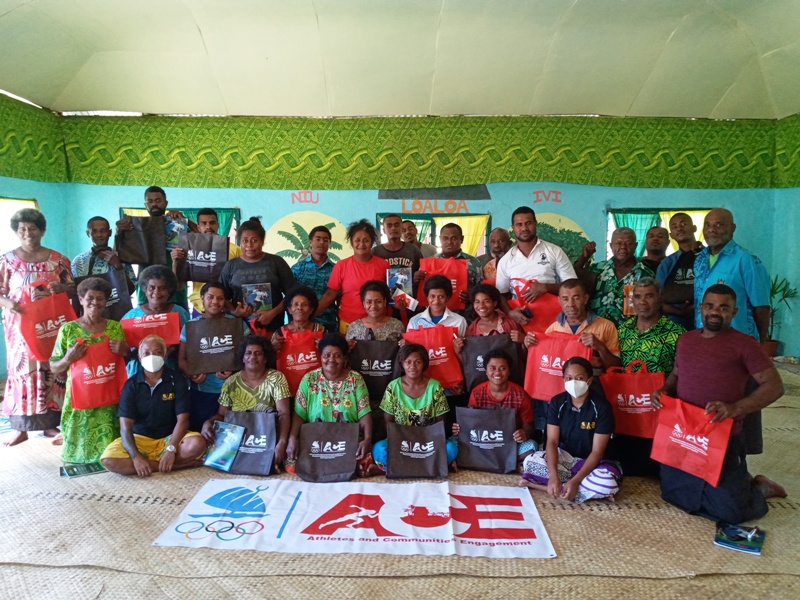 We never refuse to reuse was the word from Dawasamu District Advisor Sanaila Rokotuivuna during a weeklong outreach organised by Fiji Association of Sports and National Olympic Committee’s Athletes and Communities Engagement (ACE) Programme held last week in Tailevu North.

Silana Villager Sanaila said he was grateful that the programme reinforced the Village’s commitment to its Go Green programme.

"Here in Silana there is nothing that we put to waste," he said.

"We try our best to put into action the five r's which are refuse, reduce, reuse, repurpose and recycle."

"We have a saying here in the village that we will never refuse to reuse."

Sanaila said everything that was bought from the village shop that could be recycled was used again in some form.

"An example is when we buy tin goods from the village shop, we use the tinned items as building materials for walls or turning them into ashtrays and other things," he said.

"We have also used discarded or broken plates, cups and other crockery into floor designs."

Sanaila said there was a trickledown effect when the village started its Go Green programme.

"We have noticed that villagers are mindful of discarding rubbish and are eating more healthy foods.

"Because of this there has been less to almost no rubbish in the village and our villagers are looking healthier," he said.

Sanaila said the village started its Go Green programme a few years ago after a visit from an overseas non-governmental organisation, Global Vision International.

It was after this visit that Sanaila was part of a 2016 trip to South Korea for an international conference on Community-NGO Partnerships.

He said the trip was an opportunity to gain knowledge about how small communities from all over the world engage with NGOs like Global Vision International to achieve developments for their village.

Sanaila was one of two people in the whole of Fiji chosen to represent rural villages.

"They showed us what we could achieve and how much we could save by fulfilling the five r's," he said.

"Now our villagers are not only saving a lot of money but are also looking and feeling a lot healthier."

Sanaila said he also noticed that both the men and women in the village were working more closely together when it came to village work.

"One of the topics shared by the ACE programme was gender equality and here in Silana you will notice that both men and women share the workload in the village," he said.

When the ACE Programme, along with its partners visited Silana Village, young boys and girls were mixing cement together to extend the Village's walkway.

"Even during huge functions, it is usually the men that cook and serve so we try to ensure that both sexes can perform the duties of the other when one is missing," he said.

ACE Champion Kinisimere Ravai said it was very encouraging to see that a village like Silana was being proactive in its approach to Go Green.

"It was nice to see that Silana Village was taking steps to ensure that cleanliness was almost second nature to the villagers.

"Their commitment to the Village, keeping it clean and seeing both men and women sharing the workload is encouraging and a bright example of what could be achieved if everyone worked together," she said.

Silana Village was one of 16 villages and communities between Veicorocoro and Nasinu in Tailevu that was part of FASANOC’s ACE Programme in partnership with Fiji National Sports Commission (FNSC), Fiji Womens Crisis Centre (FWCC) and Fiji Football’s Just Play Programme outreach.

Go Green was one of three messages delivered during the outreach programme which also included the prevention of Non-Communicable Diseases and Gender Based Violence.

The ACE Programme serves FASANOC's  vision to "Inspire the People of Fiji through sporting excellence" through its aim to encourage, engage and empower athlete leaders and communities in Fiji through the advocacy of the Olympic Values, True Spirit of Sport and Social Messages.