Team Fiji’s Tokyo 2020 Rugby Sevens Men’s and Women’s teams were on center stage one more time in Tokyo on Sunday 16th October, at a Thank You Tokyo! event. 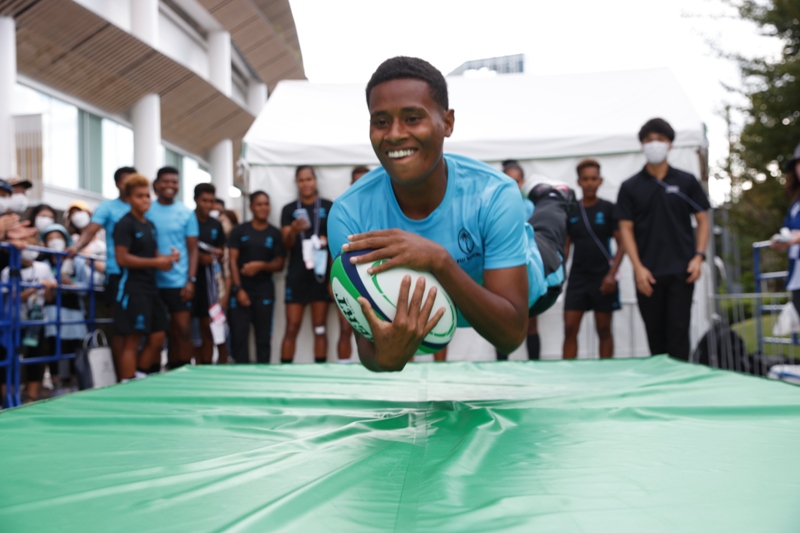 Team Fiji’s Tokyo 2020 Rugby Sevens Men’s and Women’s teams were on center stage one more time in Tokyo on Sunday 16th October, at a Thank You Tokyo! event.

The event that was organised by the International Olympic Committee (IOC), in collaboration with the Tokyo Metropolitan Government and the Japanese Olympic Committee, included a series of sports initiations and demonstrations from some of the world’s top athletes, as well as a Commemorative Ceremony to thank the people of Tokyo and Japan for making the Olympic and Paralympic Games Tokyo 2020 a success.

Team Fiji Rugby Sevens Women Manager, Vela Naucukidi, said they were honoured to be a part of such a memorable event.

"We were touched by the generosity and hospitality of the Japanese people who made us feel at home and we appreciate what they had done for Team Fiji while we were participating at the delayed 2020 Olympic Games," she said.

Both the men and women teams, although missing a few Olympians, participated in an exhibition match with Team Japan at the main national stadium.

"Winning was not the focus but rather showcasing the Olympic values of Friendship, Excellence and Respect was what we wanted to show the Japanese public," Vela said.

Fiji Association of Sports and National Olympic Committee (FASANOC) Chief Executive Officer, Lorraine Mar said it was an honour to have the Men’s and Women’s 7s teams selected by IOC to be part of the celebrations.

"The Games had been a test for every nation as we collectively dealt with the pandemic.

Japan and its people had made the whole experience an unforgettable one. Thank you Japan and thank you for keeping us in your minds, a year after the Games," she said.

Around 18,000 people, including many families, gathered outside the National Stadium to experience sport and Olympic-themed cultural activities.

Participants were invited to try climbing, athletics, skateboarding – a sport that made its Olympic debut at Tokyo 2020 – and breaking, which will feature for the first time at the Olympic Games in Paris 2024.

Following the sports initiations, close to 14,500 people – winners of a ticket lottery – gathered at the National Stadium, where a Commemorative Ceremony celebrated those at the heart of the Olympic Games: the athletes.

“Today, I would like to express the deep gratitude and admiration of the entire Olympic Movement to all of you – the Japanese people who made the Olympic and Paralympic Games Tokyo 2020 such a resounding success,” said IOC President Thomas Bach, who addressed the crowd via a video message.

Looking back at the Games, he said, "against the backdrop of a global pandemic, seeing everyone united in Tokyo was truly magical. The athletes expressed their gratitude and responded with outstanding performances. They amazed us with their response to all the challenges and adversity. They showed us that no matter what obstacles we might face, we can only go faster, only aim higher, only become stronger, if we stand together – in solidarity.

“Just like the athletes, all of you demonstrated our new Olympic motto: Faster, Higher, Stronger – Together. We did it for the athletes. We did it – together.”

Olympic memories were already brought back to Tokyo the day before the events, when the Tokyo 2020 Olympic cauldron was unveiled in Ariake Arena, Tokyo – where it had been displayed during the Games. Lit over a year ago by Japanese tennis star Naomi Osaka, it sent a strong message of hope to the pandemic-stricken world.

Today, it is a symbol of the significance of those historic Games and the strong legacy that they have created for their hosts.