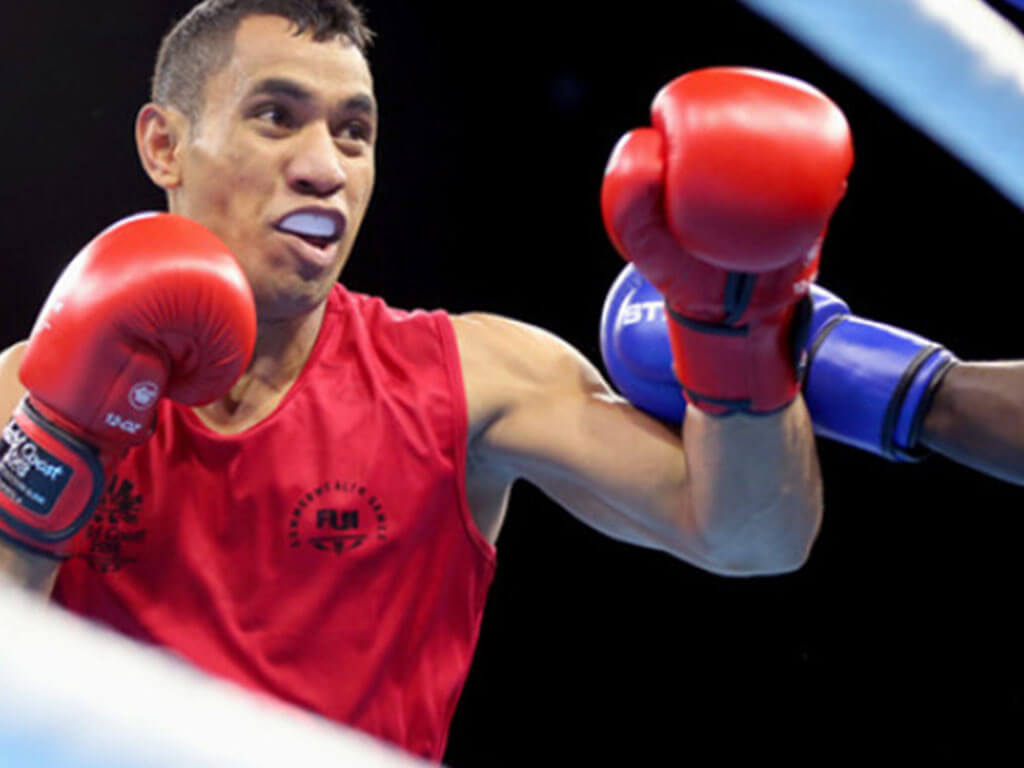 2020 OLYMPIC GAMES QUALIFICATION,Amman, Jordan, 28 February - 23 March
‍Rio Olympian Winston Hill and 2019 Pacific Games silver medallist Jone Davule Koroilagilagi were coached and managed by AIBA Star 2 Coach Pauliasi Ratu to this qualifying event. The tournament was initially scheduled for Wuhan, Chinafrom 30 January - 15 February, 2020 but the Covid Virus necessitated a change in venue and Jordan was selected. Both boxers failed to progress beyond the first round and lost by points. President Boxing Fiji requested at the AIBA OCBC Forum if Oceania could be granted its own qualification pathway to theOlympics, as was previously the practise to give credence and full value to the5 Olympic Rings and specifically Oceania.

‍LAUNCH of 2020 BOXING SEASON, Commander (Cmdr) Stan Brown Boxing Gym, Walu Bay - February
‍The Samoan Measles outbreak from September 2019 to January 2020 forced the NationalFederation to close its new Gym under instruction from Fiji’s Ministry ofHealth as a preventive measure.  As ofJanuary 2020, there was over 5,700 cases and 83 deaths recorded in Samoa. In late January 2020 the Fijian Government lifted its’ ban and the 2020 boxing club competition was launched on Saturday, 1st February.  We had clubs from both the Eastern &Western Divisions participating

‍LOCKDOWN – NO BOXING due to pandemic - March to July
‍The FijianGovernment banned all sports as the pandemic struck the major countries of the world. In addition, the Government closed its borders to all international flights effectively protecting Fiji from the pandemic.

RESTART of National Club Competition July - December
‍The establishment of the Cmdr. Stan BrownBoxing Gym in Walu Bay, Suva was a tick off from the 2016-2020 Strategic Plan.The Walu Bay Gym created the foundation platform and permanence the Board had strived hard for years to establish to produce the desired outcome projected.The pandemic had an adverse effect on the economy and sports, but for amateur boxing it became a “silver lining.” From a total of 10 active clubs our registration rose to 37 clubs. The number of boxers at weigh-in went from 60 to around 300 boxers. The total bouts increased from 1-15 to 50-60 bouts for all grades.

JUNIOR, WOMEN, SCHOOL AGEBoys & Girls Introduction – July to December
‍The development by Clubs of Elite &Youth Women boxers, Juniors and “School Age Boys and Girls” boxers and their participation in the fortnightly competition changed the dynamics of the national club competition.  In its last60-year history the clubs only supplied Youth and Elite Men Boxers. The inclusion of this new group of boxers has resulted in an increase in participation and spectator numbers.  Our appreciation goes out to all Clubs, Coaches, Boxers and Club Officials frothier contribution to this phenomenal growth.  The Board acknowledges the tireless efforts of the Competition Committee headed by Carson Young and his hardworking crew.

College of Honours Awards,State House – October
‍Boxing FijiPresident’s nominees, Legends Alipate Korovou & Sakaraia Ve were awarded the 50th Anniversary Independence Medal for their outstanding contribution toBoxing, by the President of The Republic of Fiji, Mr Konrote at GovernmentHouse, Suva.  Alipate Korovou won Fiji’s first international boxing championship by beating New Zealander Monty Bethamfor the Commonwealth Middleweight Championship title.  Ve twice fought for the Commonwealth title against Canadian Clyde Gray but fell short both times in the welterweight division.  Both Korovou and Ve had amazing amateur and professional careers in and outside Fiji that has not been replicated by Fijian boxers in this modern era.

TRIBUTE Manu Koroi, Supervisor R&J & Boxing Team Manager – November
‍The sudden demise on 23 November of SupervisorReferee & Judges, Mr Lockwood Manueli Koroituinakelo, or “Manu Koroi,” cameas a shock to the boxing fraternity as he had just officiated less than 36hours prior at the Cmdr Stan Brown Boxing Gym. Manu competed in the same gym, known then as PWD Gym representing United, PWD and later Prisons Boxing Clubs as a welterweight.  Under AIBA Star 3Coach Seru Whippy, Manu was appointed the first Supervisor Referee & Judge for amateur boxing.  Manu’s dedication and commitment to the National Federation & Board earned him unanimous selection as Boxing Team Manager to the 2016 Asian Oceania Olympic QualifyingEvent, Qian’an China, 2017 Pacific Mini Games Vanuatu, 2018 Tri Nations ChampionshipPNG and the 2018 Gold Coast Commonwealth Games.  At the annual Golden Gloves NationalChampionship, three awards will be presented in Manu’s name to honour his memory and legacy. Thank you for your service and RIP Manu.

INAUGURAL KIDS BOXING PROGRAM – Cmdr Stan Brown Boxing Gym – December
‍The inaugural 3 weeks School Holiday BoxingProgram for Kids was launched in December, interrupted by Tropical Cyclone Yasa and completed in January 2021. The key deliverables - introduce boxing, build self-confidence, discipline and learn the fundamentals of boxing for Girls& Boys (7-16 years) in a safe and fun environment from AIBA & FABA certified and accredited coaches.  The program was conducted at the Cdr Brown Boxing Gym in Walu Bay and over 40 girls and boys participated including two from Lomaloma, Vanuabalavu who were waiting on a ship to return home.  The program was supervised by 4 Coaches including a certified Child Protection Officer, one of the two registered with Boxing Fiji.  Separate toilets and change rooms were provided and refreshments and recovery food(oranges, bananas, apples, water melons) was provided at all sessions.  Boxing Fiji records its appreciation to FijiNational Sports Commission for funding of the project.  Forty Certificate of Participation were awarded to the girls and boys who participated in the program.