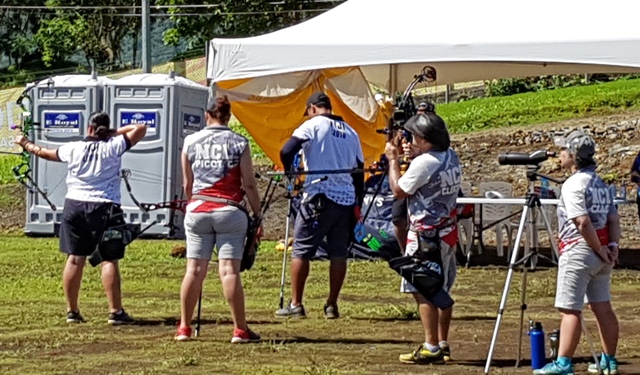 Archers hoping to be a part of Team Fiji to the 2020 Olympic Games  will have one last opportunity to qualify during the 2020 World Archery Oceania Championships to be held in Fiji in April, this year.

However, World Archery Fiji President George Fong is happy that there will be enough opportunities for their athletes to seek qualification towards Tokyo 2020 Olympic Games before the final qualifier in April.

Referring to the 2020 World Archery Oceania Championships being held in April, George said  that there were “seven local qualifiers which had started from November last year and continuing to February, 2020, and the two International tournaments in the 2020 - New Zealand National Championships and 2020 Australian Archery Open whose results will also be considered toward qualification. "

George said earlier this month World Archery Fiji held the fourth of its seven planned Qualification events to select a team for the 2020 World Archery Oceania Championships which is a Continental Qualifying Tournament for Tokyo, 2020 Olympic Games.

"We had eight participants that Sunday, consisting of four recurve men, three compound men, and one compound woman," he said.

"From these seven local qualifying events we hope to have a final team of eight archers to compete at the 2020 World Archery Oceania Championships in April in Suva, Fiji."

"As it is an Olympic Year we also based our recurve results on the Olympic Minimum Qualifying Score," he said.

There are 128 qualifying places available for archery at the 2020 Summer Olympics: 64 for men and 64 for women. The qualification standards were released by World Archery in March 2018.

World Archery Fiji President George Fong said that Fiji fell into the the group of countries which had not qualified athletes through team qualification and therefore may earn a maximum of one quota place per gender for the individual events.

To be eligible to participate in the Olympic Games after the a quota place has been obtained, all archers must have achieved the following Minimum Qualification Score (MQS):

The MQS must have been achieved between the start of the 2019 World Archery Championships and the final entry at a registered World Archery event.

George said they would be competing against recurve archers from Tonga, Samoa, Solomon Islands, Vanuatu and Palau for the Individual Men’s Quota spot.

"Fiji has won three out of the past four quota spots since 2000, and I am confident of our chances of taking this upcoming one," he said.

"Our archers have prepared well."

George said World Archery Fiji is also excited that for the first time, there is now a Quota spot for the 2021 World Games in the United States of America for a Compound archer.

"We have a very strong men's compound team, including Pacific Games champion Fred Leota, and will be contesting for that."

Olympian Robert Elder has been Team Fiji's most successful Archer having competed at the 2004, 2012 and 2016 Olympic Games with his most promising performance coming at the 2012 Summer Olympics in the men's individual archery, coming 63 in the ranking round, before almost pulling off a shock comeback over Korean Kim Bub-Min who would later on win a gold medal.