After a lapse of two years due to COVID-19 restrictions, close to 300 people joined the FASANOC in celebrating Olympic Day on Saturday 9 July, 2022 at the Marist Brothers High School Grounds in Suva. 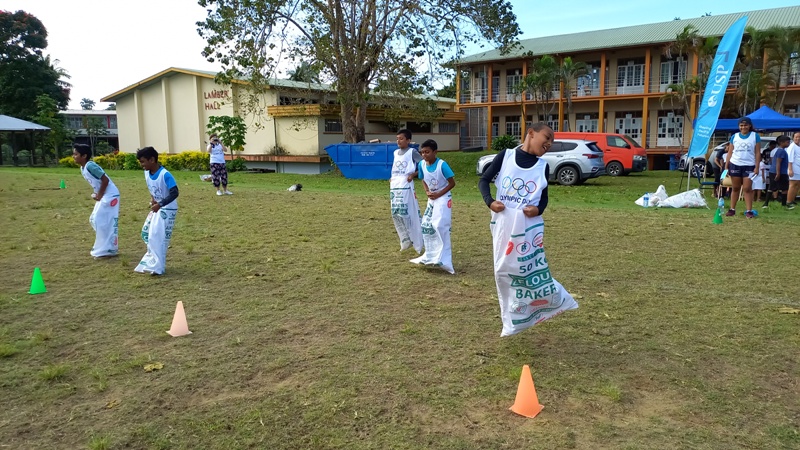 After a lapse of two years due to COVID-19 restrictions, close to 300 people joined the Fiji Association of Sports and National Olympic Committee (FASANOC) in celebrating Olympic Day on Saturday 9 July at the Marist Brothers High School Grounds in Suva.

With the theme " Together, for a peaceful world" Olympic Day 2022 was focused towards bringing people together in peace through games and sports.

Saturday’s event saw parents and children of different backgrounds come together to enjoy and participate in sports that many were able to try for the first time.

The host for the day was Athletes Representative Quintyn Stephens and  the programme started with two time swimming Olympian, Matelita Buadromo, sharing the IOC President’s Olympic Day message which called on the Olympic Movement to promote peace through sport.    In his message President Thomas Bach referred to the Olympic spirit which guides sportwomen and men to “strive to go faster, aim higher, become stronger, by standing together – for a peaceful world.” This was followed with a vigorous warm up session led by athletes from Taekwondo.

Also present during the day were Team Fiji athletes and officials who will be participating at the 2022 Commonwealth Games in Birmingham, England later this month and other Team Fiji athletes and officials who have recently returned from the 2022 Pacific Mini Games in Saipan, Northern Marianas.   The day was also graced by the presence of the Ambassador for France in Fiji, HE Mr Francois-Xavier Leger, FASANOC President, Mrs Makarita Lenoa and Vice President Prem Narayan.

FASANOC CEO Lorraine Mar said, “Olympic Day is an important day for us because it’s one day where we get to share the Olympic ideals in person with the community.”

It was more special this year since for the last two years we’ve had to use digital means to spread the message and couldn’t really interact with the community. It’s a better experience when people are enjoying  and learning new sports at the same time, she said.

We hope Saturday’s sports fair  ignited a fire in athletes and their families to pursue their own Olympic dreams and by doing keep the Olympic spirit alive. “

On 23 June, the official Olympic Day was celebrated all around the world: hundreds of thousands of people – young and old – got moving and participated in sporting and cultural activities, such as runs, exhibitions, music and educational seminars.

Over the last two decades, Olympic Day  has helped to spread the Olympic ideals to every corner of the world and encouraged people to include healthy life styles through physical activity.

Olympic Day was introduced in 1948 to commemorate the birth of the modern Olympic Games on 23 June 1894 at the Sorbonne in Paris.

The goal was to promote participation in sport across the globe regardless of age, gender or athletic ability. Based on the three pillars “move”, “learn” and “discover”, National Olympic Committees organize sports, cultural and educational activities.

Fiji’s Olympic Day gave members of the community the opportunity to try out different sports, with 10 National Federations showcasing their sport and in a collaboration with the University of the South Pacific, traditional sports were also featured with the highlight being a coconut husking competition.   Each participant was also presented with an official Olympic Day certificate signed by the Presidents of the IOC and FASANOC.

FASANOC sincerely thanks all the participants, the National Federations, the USP Team, our Sponsors and our volunteers for their celebration  of the Olympic values of Friendship, Excellence and Respect at Olympic Day 2022.