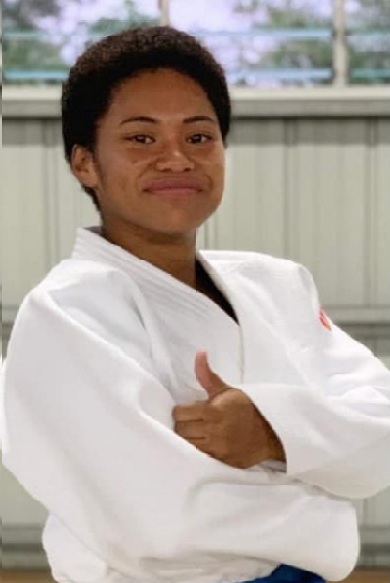 The Fiji Association of Sports and National Olympic Committee (FASANOC) congratulates Judoka Veniana Ravesi who has been accepted to attend the Women In Sport High Performance Pathway (WISH) programme with the support of Olympic Solidarity at the University of Hertfordshire, United Kingdom.

The 22-year-old Judo Development Officer was identified and selected by the International Judo Federation (IJF)  as  a participant for the WISH programme which is designed to equip women coaches, who have the potential and ambition, to succeed in gaining roles at elite coaching levels within their sport.

Veniana who hails from Totoya in Lau and is currently pursuing Sports Science at the Fiji National University, was informed about the WISH programme by her National Federation, the Fiji Judo Association.

"By participating in this programme, I want to develop my skills in coaching and take back the knowledge that I have gained to help athletes reach their full potential, particularly female athletes in judo," she said.

Veniana said the programme would also allow her the opportunity to gain more confidence as a female coach by helping identify her strengths, pursue her goals and learn to take opportunities that will further help develop her career in coaching.

Veniana, who participated at the 2019 Pacific Games as an athlete, took up the role of coaching after noticing the lack of female coaches in her chosen sport.

"As a former athlete, I am aware of the special needs that female athletes need in preparing for competitive sports.

"However, with the lack of female coaches in Judo, I want to bridge that gap to ensure that all female athletes have the same resources and information that is given to their male counterparts," she said.

She said she also wanted to look at the technical and physical needs that female athletes might need to enhance their development to the next level.

FASANOC Chief Executive Officer, Lorraine Mar,  said this is a fantastic opportunity for Veniana to bridge the gap in a male dominated sport as well address the lack of women coaches across all sports.  We wish Veniana the very best and look forward to her contributing to Judo here in Fiji from this opportunity.

The WISH Programme will start on August 15, 2022 at the University of Hertfordshire in the UK.

The WISH Programme supported by Olympic Solidarity, has been developed to target women and sport development, according to Recommendation 6 from the International Olympic Committee's Gender Equality Review Project.

This recommendation states, as an action, to encourage ‘Balanced gender representation for coaches selected to participate at the Games.’ Specifically, the working group recommended that ‘the IOC coordinates the development of an action plan in collaboration with Olympic Movement stakeholders for more women to be eligible to participate at Olympic Games. It is also recommended that a baseline for female entourage members at the Olympic Games is established.’

Closing the gender gap in coaches at the Olympic Games has been reiterated as a priority for the IOC in the new IOC Gender Equality and Inclusion Objectives for 2021-2024, Objective 15.   Taking into account that women represent 10 per cent of coaches at the Olympic Games, the IOC has resolved to coordinate the development of an action plan in collaboration with International Federations (IFs) & National Olymic Committees (IOCs), for more women to be eligible and selected to participate at World Championships and the Olympic Games”.

The WISH Programme is a joint initiative between Olympic Solidarity and a number of International Federations, bringing together outstanding High Performance Coaches from around the world and providing a unique opportunity and an environment for learning that will support women High Performance Coaches to further develop their coaching skills in a high performance domain, leadership behaviours and confidence to progress their career path.

Lorraine Mar said that the WISH  programme, which runs over 21 months, is a welcomed initiative and FASANOC looked forward to making this opportunity available to more women in the future.