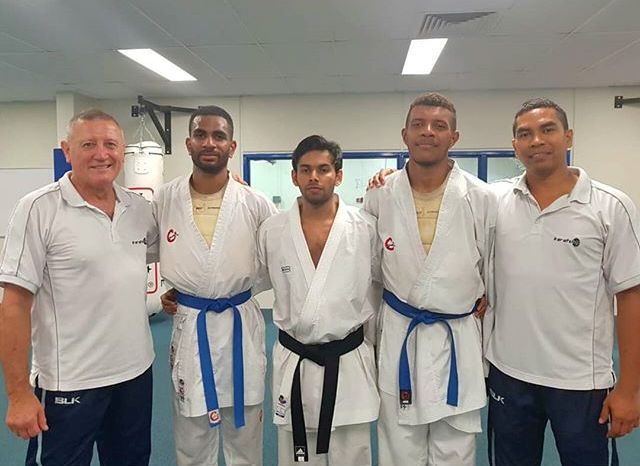 Karate Fiji’s prospect for the Tokyo 2020 Olympics qualifier is a young athlete aged 23 years of age from Vesida HART, Nasinu. Tevita Tamanigaunatawamudu has been practising Karate since 2006, when aged 10 years, after following his mother, who is a volunteer in the Federation’s catering team, to championships and fund-raising events.

His enthusiasm and interest just to try out Karate helped him to discover that the skills could be learnt by anyone who wishes to participate in the sport. Young Tevita was happy to move away from his mother and the catering team to try for a place in the national squad.

This journey saw him leave the sport for a brief time as he felt that he would never be able to go far with the sport given the amount of overseas travel required to help develop an athlete, which would be a huge challenge for a single parent. Fortunately, by this time the coaching team had already identified him.

In a “talanoa” session with Tevita, and his mother, Lisi, former Karate Fiji President, Mrs. Makarita Lenoa, ensured that Tevita and his mother were both given all the necessary information they required or wanted to know, and were also assured that Karate Fiji would only invite Tevita for what he has – his time and the talent that has been identified, and would never ask for anything he has not got. This conversation was to later have an influence on young Tevita’s mind.

Mrs Lenoa shared with Tevita that the technical team had identified him as an athlete with potential who could be developed to world level, but it was very important to Karate Fiji that the choice to remain in the sport and continue to train, had to be Tevita’s choice.

Furthermore, she explained , that it would be the coaches and team management’s recommendation on his performance and attitude that would determine whether he would be selected to travel abroad, and not only whether he could afford it or the levy payment.

This essential piece of advice is what brought Tevita back to the sport, where he has remained up until today, on the brink of making the final World Karate Qualifying event for the Tokyo 2020 Olympics in Paris in May.

When asked about his journey thus far, Tevita stated ‘that I would like to firstly thank Karate Fiji for helping me in achieving what I have so far in Karate, and for also securing the funding for the K1 tournaments. This gives me a chance to have a lot of mat time, and to collect Olympic points too. The Olympics is the pinnacle of the sporting arena, and I’m really honoured to be given this opportunity to try and qualify for the Olympics’.

Karate Fiji acknowledges the partnerships which have helped Karate Fiji facilitate Tevita’s training and participation at high level Karate competitions, where only the one hundred top ranked karatekas from around the globe for the respective categories are eligible to participate and compete.

To the Fiji National Sports Commission, Fiji Association of Sports And National Olympic Committee (FASANOC), ONOC for the OSEP program and OSEP Mentors and Educators,

Sensei Tony Hails (Karate Fiji’s Australian Mentor Coach) and his family, and all karatekas, technical officials, family and friends of Karate and organisations who have provided assistance and/or have helped raised funds, Karate Fiji thanks you sincerely for all your valuable support .