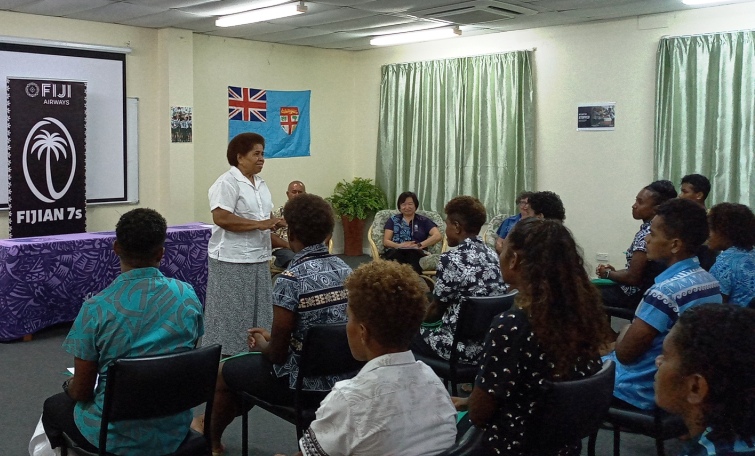 Fiji Rugby Sevens Women squad members who are hoping to participate at the Tokyo 2020 Olympic Games were encouraged “to show no fear.”

Fiji Association of Sports and National Olympic Committee (FASANOC) President, Makarita Lenoa made the comment during a visitation to the women's training camp along with Vice-President, Iowane Naivalurua and Tokyo 2020 Chef de Mission, Patrick Bower.

Mrs Lenoa told the athletes that they could not afford to doubt themselves or see themselves as second class to the Men's team.

"Let fear have no place in your life," she said.

"You are here because of how you have performed in the past and this has been recognised by your coaching and management team.

"So how you perform and control your thoughts from now will determine your result in the future."

Mrs Lenoa encouraged the athletes to guard their thoughts because it would be the biggest challenge for them.

"You have to learn to guard your thoughts, fear and anxiety," she said.

"Some of you may want to go to Tokyo but comments that have been said in the past could be a hindrance for you achieving that goal.

So it is important that you look within yourselves."

Mrs Lenoa said their greatness has already been recognised by the coaching team who were there to facilitate their needs.

"Your trip to Japan can be a reality only recognised by you and the trials, challenges and tribulations that you are currently going through can only bring out the best in you," she said.

Mrs Lenoa also thanked the coaching team for their support and guidance in ensuring that the women's team  was prepared to take on the challenge of Tokyo 2020.

She informed the athletes that they were fortunate to have Adi Vela Naucikidi as their manager because of her progression from athlete to team manager.

"Adi Vela has gone through the same training as you and so she understands what it takes to be an athlete in your position," she said.

Tokyo 2020 Chef de Mission Patrick Bower encouraged the team to also be consistent with their actions as they prepare for the Olympic Games.

"You have to realise that you are part of a team," he said.

"It is important to keep our word because we all have the same set of rules to follow under Team Fiji."

He said it was critical that all those going to participate in Tokyo 2020 understand that the rules are the same for all of them regardless of what sport they participate in.

So far Rugby Sevens Men’s and Women’s Teams along with Sailing have qualified for the Olympic Games to be held in Tokyo, Japan in July 2021.

Other sports that have athletes vying for selection and the opportunity to be a part of Team Fiji includes Athletics, Archery, Karate, Judo, Swimming and Table Tennis.