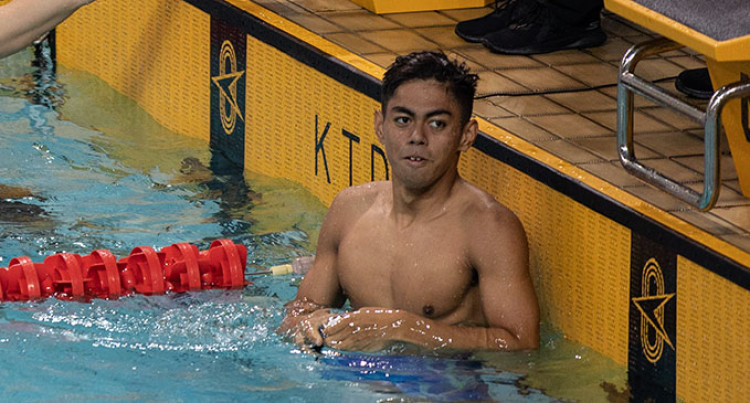 Team Fiji Swimmer and Olympic hopeful Taichi Vakasama is confident that he will qualify for an Olympic Games through effort, discipline and great sportsmanship.

"At the last Olympics I was unfortunately underage but I am confident that I will qualify for an Olympics if not now, in the near future," said the 20-year-old Japan born, Vanuabalavu swimmer.

Taichi, who started swimming when he was nine years old, said he welcomed the pressure of trying to qualify for an Olympic Games.

"I always enjoy the pressure and nervousness before races and I just let the butterflies fly around my stomach," he said.

Taichi considers his future self as his source of inspiration.

"I just kept imagining myself becoming faster and a better athlete, and made that as my aim," he said.

The current Pacific Games record holder of the 200m breaststroke, Taichi said he hopes to make the Olympics by keeping track of his times to see where he would need to improve.

"I also motivate myself by making rivals in the pool and pushing myself to beat them," he said.

"I also watch videos of my past performance over and over to see how I performed, as well as to find what else I could do to improve my performance."

Despite his hectic schedule with studies at the University of Fiji where he is studying Medicine, Taichi said he has managed to train without break since returning from the Pacific Games in Samoa last year.

"But there have been challenges with balancing  university and swimming. I currently study in UPSM (in Unifiji) and find little difficulty in time management," he said.

"There is also the swimming pool in Nadi which is extremely hot as if swimming in boiling water.

"It really drains the energy quickly and almost impossible to complete the training session."

"But for my first challenge, I would need to sacrifice all my free time and focus only on swimming and studies and seek help from my colleagues to catch up with my work whenever I miss lecture or lectures due to swimming events," he said.

Taichi said despite all the challenges his only choice was to adapt and have stronger mental attitude.

"Also being an athlete has helped me improve my time management skills and keeps me fit and healthy which gives good impression to others," he said.

He credits the Fiji swimming family for his love of the sport for their welcoming stand on all athletes that want to take part in the sport.

"It is also easy to make friends and make connections with different people of different races easily," Taichi said.

And to return the faith by the Fiji swimming family, Taichi said by winning races, he was able to promote the sport that he loves to everyone in Fiji.

Taichi said he also wished his parents were always present at his swimming races.

"They have worked hard for me to be in the pool every day, for me to swim, for me to travel overseas, for me to stand on the podium," he said.

Taichi said he was also appreciative of Fiji swimming and the Fiji Association of Sports and National Olympic Committee for providing opportunities for him to improve his times and gain experience.

"Thank you to everyone who has been supporting me in particular the coaches from Fiji swimming, without whose support, I would not be able to achieve many recent successes," he said.

Taichi was also grateful to all the coaches that have played a part in his sporting career.

"Every coach who has coached me has done their best for my benefit," he said.

Taichi hopes to give back to the sport by setting a standard as a top level athlete to the younger athletes so that they would follow the right path.

Taichi's best time in the 100m Breaststroke is 1 minute 02 seconds while the 'A' Olympic qualifying time for the Tokyo 2020 Olympic Games is 51.96sec and the Olympic Selection Time is 1min 01sec.

For each individual event at the Olympic Games, FINA_(International Swimming Federation) established two types of Standard Entry Times: an “Olympic Qualifying Time” (OQT / “A” Time) and a "Olympic Selection Time” (OST / “B” Time) of which the OST / “B” Time.

Taichi along with eight other swimmers including Olympian Matelita Buadromo, 2019 Sportswoman of the Year Moana Wind, Yolani Blake and Cheyenne Rova for the females and males Epeli Rabua, Netani Ross and Temafa Yalimaiwai are all vying for a spot in Team Fiji to the Olympic Games in Tokyo, Japan come July, 2020.