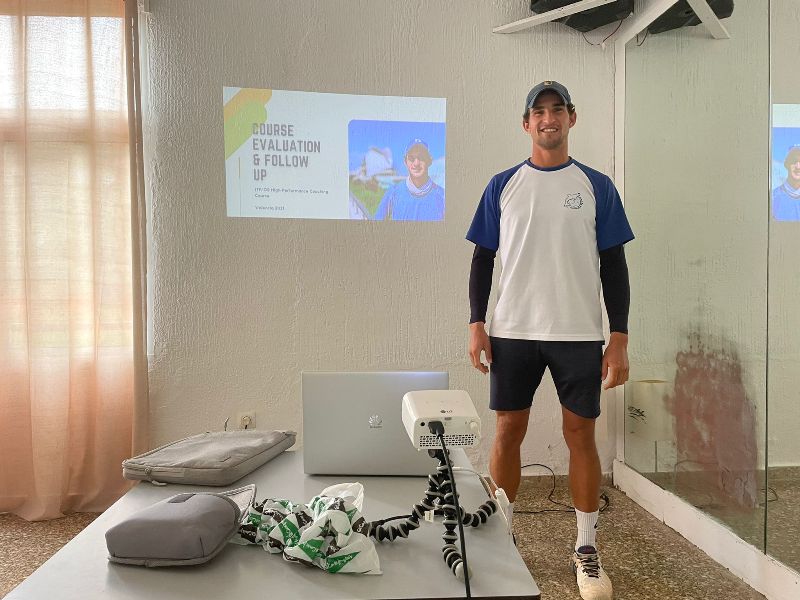 Tennis Fiji representative William O'Connell feels he is better equipped to be an inspiration to young and aspiring coaches in the Pacific region after he completed an eight-week International Tennis Federation (ITF) Coaching High Performance (CHP) course in Valencia, Spain.

"The course is the highest level of coaching certification offered by the ITF and its aim is to help high-performance tennis coaches better serve their players," he said.

"I knew it was available after completing the ITF/OS Coach of Advanced Players (CAP) course in 2019."

William said after completing the course he feels he is more equipped with knowledge to work with national athletes.

"The weekend after the course finished, I was in Rhodes, Greece with one of our national junior champions Saoirse Breen, and I felt a lot more confident working with her," he said.

"The course has also connected me to a community of highly skilled coaches that I can leverage."

William said assisting in coaches’ education was now possible with his CHP certification which was important to lifting the standard of the sport in the Oceania Region.

"I have spoken to the ITF about tutoring an ITF CAP course in the Pacific.

"I am currently the only ITF CHP coach in the Pacific and there are only three other coaches who have reached the ITF CAP level that I know of," he said.

"I require a couple of tutor training courses and will need to start as an assistant tutor, but Miguel Crespo (ITF Head of Coaches Education & Participation) is encouraging of the idea."

William said being taught by some of the best coaches and being a part of a course that included practical and theoretical sessions with regularly published scientific papers on the game was a huge boost for him and one he hopes to share in the Oceania Region.

"I am arranging zoom calls with Fiji's coaches to tell them about my trip and hopefully inspire them to take steps to up-certify and regularly connect with them on their coaching journey," he said.

William said he keeps in touch regularly with the sports coaching and administrative team and that Tennis Fiji was doing a fantastic job in navigating the lockdowns.

"We will need to stay proactive as we ramp back up and as soon as possible we need to start putting on tournaments and encourage players to compete," he said.

"Prior to the pandemic, Tennis Fiji was doing great work in drawing players to the sport through outreach and school programs which we hope to start up again as soon as possible," he said.

"With the ITF Center in Lautoka shut indefinitely, the best local players have lost access to strong competition.

"I am currently based in America and hope to use my club as a base to support our nation's best."

William said he would like to return periodically to Fiji when travel opens back up, to run camps and coaching courses.

"As a player, I will work to make myself available for regional competitions," he said.

The Fiji Association of Sports and National Olympic Committee Chief Executive Lorraine Mar congratulated William on his achievement and completion of the course.  “FASANOC looks forward to William’s continued contribution to Tennis in Fiji and support in assisting tennis players who are preparing for the 2022 Pacific Mini Games to be held in Northern Marianas 17-25 June.”

The aim of Olympic Solidarity is to provide assistance to all National Olympic Committees (NOCs) for athlete development programmes, in particular those with the greatest needs.

This assistance is achieved through multi-faceted programmes prioritising athlete development, but also training of the athlete entourage ie coaches and sports administrators, and promoting the Olympic values.