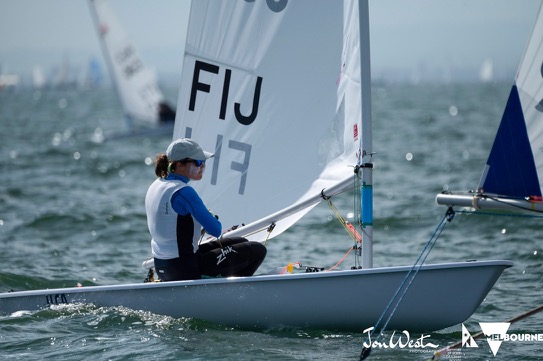 The Fiji Association of Sports and National Olympic Committee's Athletes Commission facilitated the session with Oita Prefecture officials, who had also assisted Team Fiji during the Pre-Games training camp for Tokyo 2020.

Both Tevita and Sophia conversed with Handa school students and learnt about their culture and key scenic features through using photos through zoom where the students also used the opportunity to practice their English.

"The overall experience with this event was amazing, it’s wonderful learning about a different culture and also get that opportunity to share about our own culture," said Sophia.

Tevita described the exchange programme as great and humbling.

"Seeing how Japanese kids were trying to learn about our small nation country of Fiji and presenting their presentations in English was enlightening," he said.

"I hope schools and sports clubs in Fiji can take advantage of the technology we have now and reach out to current and past athletes to hear from their perspectives on situations and to motivate and inspire future generations of athletes and leaders of Fiji."

Meanwhile both athletes have already set their sights on qualifying for the next Olympic Games in Paris, France in 2024.

"As for Paris 2024, I plan to get back to my peak form physically & mentally and to compete in many competitions," said Tevita.

"I also plan to attend as many training camps as possible with Covid-19 still affecting the world today so plans may change here and there but the plan is to be better prepared for whatever comes on my road to Paris 2024."

New Zealand based athlete, Sophia is looking at finding as much competition as possible.

"In terms of my plans for Paris 2024, I am competing nationally and starting to get into a more consistent and intensive training block as I work towards my international competitions later this year which will be building blocks to the Paris Olympics," she said.

The Olympic Movement, under the leadership of the International Olympic Committee (IOC), uses diplomacy to promote the fundamental principles of Olympism and to contribute, through sport, to the promotion of peace, coexistence, tolerance and non-discrimination among countries, communities and ethnicities.

To face these changes, the IOC has been the leader of multiple diplomatic initiatives, using the power of sport to promote understanding and collaboration.

FASANOC is very proud of Sophia, Tevita, Cheyenne and Viniana and appreciates their  willingness to live the Olympic ideals by collaborating with Oita City in this initiative which allowed them to not only share their experiences but also to promote the Olympic values of friendship, excellence and respect.

As seen from the Tokyo 2020 Olympic Games, the collaboration with Oita City and the Kaku Elementary and Middle School and Handa Middle School is an excellent example of the power of sport in bringing people of diverse backgrounds together.

FASANOC’s Athletes Commission is looking forward to further exchanges in the future.